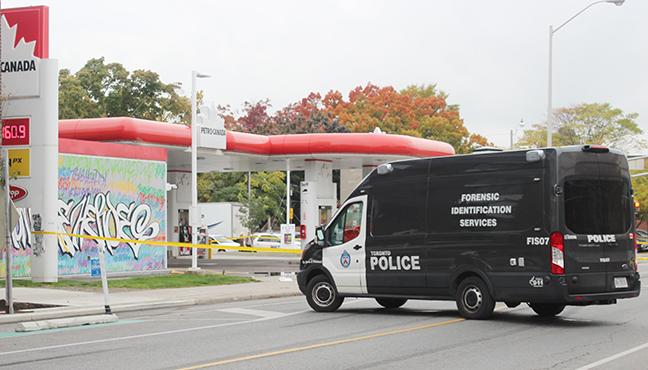 Toronto police are investigating a stabbing that took place this morning (Wednesday, Oct. 19) at approximately 4:40 a.m. in the Danforth and Gledhill avenues area. Photo by Alan Shackleton.

A woman is in life-threatening condition after being stabbed near Danforth and Gledhill avenues early this morning.

The stabbing is believed to have taken place in the school yard at Gledhill Public School after a verbal dispute. According to reports, the victim then made her way to a gas station at Danforth Avenue at Patricia Drive seeking help at approximately 4:40 a.m.

Police are looking for a male suspect in connection with the stabbing.

He is described as being about five-feet, 10-inches tall, and wearing dark clothes.

Gledhill Avenue and the school yard is also closed north of the Danforth for the investigation. This has led to students attending Gledhill Public School being redirected to D. A. Morrison Public School – possibly for the rest of today.

The incident is still under investigation.