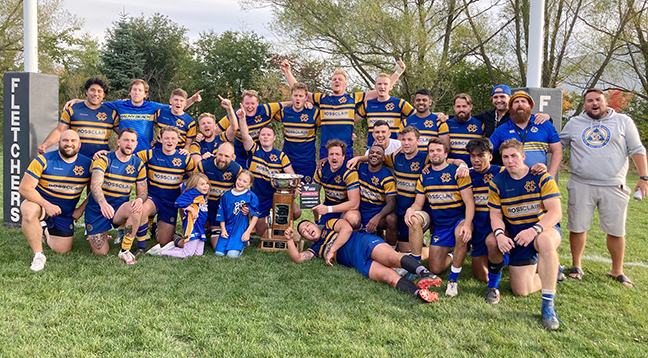 Balmy Beach’s 1XV won the McCormick Cup with a thrilling 24-23 victory over the Toronto Scottish at Fletcher’s Fields in Markham on Oct. 1

Balmy Beach’s 2XV won the Gee and Gage Cup with a dominating 52-26 win over the Lindsay Rugby Football Club also on Oct. 1 at Fletcher’s Fields.

“This was the culmination of a two-year building process. Coming out of COVID we knew what our goal was, a McCormick Cup and Gee Gage Cup,” he said. “All of our players and coaches gave everything they had this season to ensure that we achieved that goal.”

The victory by the 1XV marks the 16th McCormick Cup championship for Balmy Beach. That ties them with the Markham Irish for most McCormick Cup titles won by any club in the province.

“It was an amazing feeling getting the win against the Scottish for our first McCormick Cup since 2015, said Balmy Beach captain Stephen Dwyer.

“We have been working extremely hard for this moment all during the pandemic, putting in the extra work during the winter months to help us achieve it. It would not have been possible without the sacrifices the guys made along the way and was also helped by our coaches who gave us the tools and gameplan for us to be at our peak when it mattered the most.”

The score in the McCormick Cup championship game went back and forth and was described as “a hard-hitting battle”.

The defence of Balmy Beach had to stand strong against numerous attempts by the Toronto Scottish during long periods in which they had possession of the ball.

“We had to gut up and defend over and over again for 10-plus minutes at a time. This made it absolutely integral that the Beach defence hammered into the Scottish forwards in order to stop their momentum,” explained McLeish in a report on the game sent to Beach Metro Community News.

Balmy Beach led 17-15 at the half. The low-scoring second half was a defensive battle between both teams which saw Balmy Beach come back from being down 23-17 to score a try and successful convert to take the win by one point.

The final try for Balmy Beach in the dying minutes of the game was scored by Pete Vandersteen, but it would require the successful kicking of the two-point convert by captain Dwyer to win the match.

“Team Captain Stephen Drwyer lined up the kick, which banged off the uprights. Thankfully the rugby Gods were smiling on Beach and the ball crossed over the posts after the bounce. Score 24-23 for Beach,” wrote McLeish.

Toronto Scottish made a furious push to score at the end of the game, which included injury time, but Balmy Beach’s defence held them off.

Dwyer said the game and the McCormick Cup win as an emotional one for the Balmy Beach players and they drew inspiration from the late Paul Myers, a former team coach who died earlier this year.

“The game itself was crazy and I don’t think we would have overcame the hurdles we faced without a little help from somebody very special to our team and the Beach, the late Paul Myers who sadly passed away this summer,” said Dwyer. “Paul was an influential  part of our coaching group and it is without doubt extra special for us to be able to win this cup in memory of him.”

In the Gee and Gage Cup final, the Balmy Beach 2XV put in a strong over effort right from the start to double Lindsay 52-26 and take the title.

“As this game kicked off it became clear pretty quickly that Lindsay was in trouble,” wrote McLeish.

“Led by Captain Malency Wainwright at inside centre and directed from the front by 16-year-old Stephen Webb, Beach marched down the field again and again seemingly unopposed. By the time the whistle blew for half time the score was 28-7. The deep Beach bench brought fresh legs into the fight with solid shifts put in by long time Beach stalwarts Brandon Connerty and Curtis Brown.”

“This year’s success has been a huge testament to the hard work that’s gone on in our rugby club both on and off the pitch,” she said.

“We are trying to develop a winning club culture that promotes hard work, commitment and community all which came through in the final. We are all so proud of our teams and they are so thankful for their sponsors, supporters, coaches and families. We look forward to continuing our success with Balmy Beach men’s and women’s teams for the 2023 season. UP THE BEACH!”