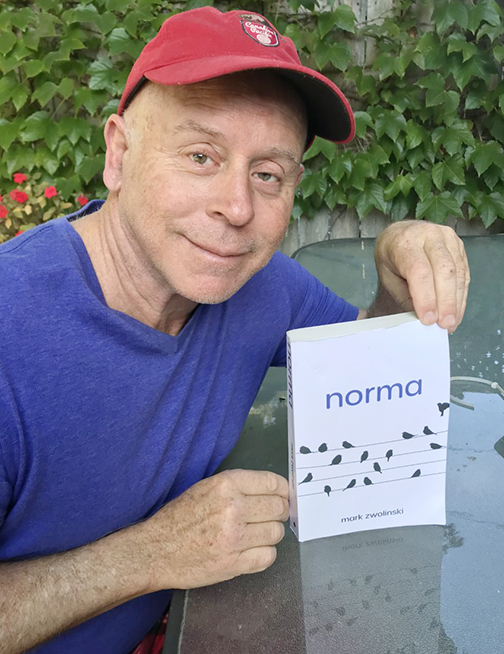 Toronto Star sports reporter and Beacher Mark Zwolinski is making his first foray into the world of fiction with his recently released novel Norma.

Norma is a unique story featuring an unconventional protagonist, the 56-year-old Norma, as she battles corruption after coming across the phone of a murdered woman containing incriminating evidence against the victim’s assailants.

Zwolinski began his reporting career following a two-year stint, from 1979 to 1981, as a pro baseball player in the New York Mets’ minor league system where he was teammates with Billy Beane and J.P. Ricciardi.

“Baseball was a big part of my life,” said Zwolinski. “I was hoping to become a pro, I just wasn’t quite good enough.”

Wondering what to do following his time with the Mets he found his way to York University in the winter of 1980. With an interest in writing, Zwolinski gravitated towards the university’s newspaper, Excalibur Publications. A naturally shy person and initially intimidated by the idea of newspaper writing, it wasn’t until his second year that he joined the paper.

“I was so nervous but in my second year I actually went in the door and they needed a sports reporter,” said Zwolinski. “I haven’t stopped since.”

Zwolinski transitioned from Excalibur to the Toronto Star in 1982 as a freelancer. After a few attempts, he successfully pitched a story on Wayne Gretzky’s brother, Brent. The successful pitch has led to a 40-year career with the Star where he has covered a plethora of sports including the Blue Jays and the World Series of baseball, the Toronto Maple Leafs in hockey and the Toronto Argonauts of the Canadian Football League.

A fan of poetry and creative writing, Zwolinski said writing Norma was a labour of love for him.

“I want to expand,” said Zwolinski said of his writing. “I think that’s where my real strength is, in really painting a picture.”

During the four months he took to write the novel, Zwolinski found that many of the traits that helped him as a sports writer, including discipline and the ability to maintain focus, translated well into his new venture as a novelist despite the rigid structure of newspaper writing.

“Writing is like putting pen to paper,” said Zwolinski. “It was almost like there’s a satisfaction of writing the creative thing that was physical too. I actually got a sore wrist and so I would put my laptop on a pillow, sit on the couch in front of the fireplace, and the fire would go out around two or three in the morning. I didn’t even know what time it was, I was typing for so long.”

Originally conceived of as a screenplay, the age of the protagonist mirrors Zwolinski’s at the time he started writing the novel. In addition to the matching ages for the author and protagonist, Norma’s personality closely resembles his own, said Zwolinski.

The inspiration for the character came to Zwolinski while shopping with his wife. “I was sitting in the car with my dog, Chewy, and noticed a woman hunched over on her shopping cart, she could barely move,” he said.

What struck him about the woman wasn’t only her unusually warm clothing on a summer day, but that she seemed to be hiding her distress.

“I almost came to tears because I just wanted to go say ‘How are you?’ because it just seemed like the world had forgotten her,” said Zwolinski.

Not only did he choose to feature a unique perspective for his novel, he wanted to change the way audiences perceive and read fiction.

“It’s so much about writing the story but it’s about also writing a story that has a depth to it,” said Zwolinski.

“A lot of this book tries to mimic a painting in that when you look at it you’re finally going to see something when you look at the whole thing, but you could study one part of it and really try to understand it. A lot of it will make sense in the end but the understanding is built piece by piece.”

While Norma is Zwolinski’s first fictional novel, he has previously written The John Kordic Story, about the life of late National Hockey League enforcer John Kordic.

In addition to his duties covering the Maple Leafs for the Star, Zwolinski is also an avid drag racer, an advanced bodybuilder and trainer, muscle car enthusiast, extreme skier and a member of the Toronto Model Railroad Club.

If you would like to purchase a copy of Norma, please go to the Amazon website at https://www.amazon.ca/Norma-Mark-Zwolinski/dp/1039104576