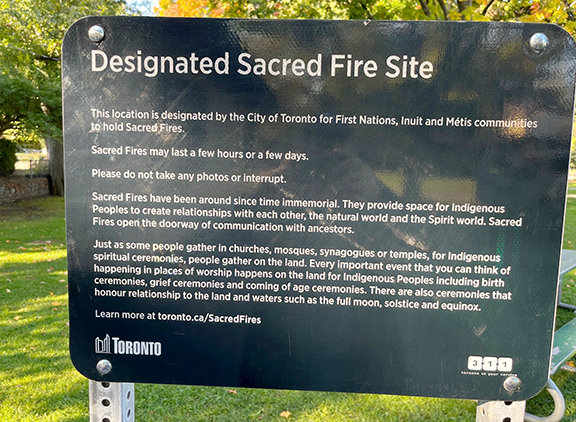 Toronto has put Action 15 of the City’s Reconciliation Action Plan in motion as it attempts to reduce barriers for Indigenous People accessing Sacred Fires.

Following consultation from a number of Indigenous community members and leaders, it was determined that Allan Gardens, Christie Pits Park and Norwood Park were in the most pressing need of such sites.

“Since time immemorial, Indigenous Peoples have used Sacred Fires for wellness, healing and gatherings,” stated a press release from the City of Toronto announcing the openings of the sites.

“Just as some people gather in churches, temples, mosques or synagogues, Indigenous ceremonies happen on the land.”

In recent times, Toronto has attempted to further enhance access to land for Indigenous ceremonies. In 2021, Toronto Council approved bylaw amendments to create a new classification for fees associated with cultural fires.

According to the press release, a separate category for open air burnings related to cultural or religious events ensures “TFS (Toronto Fire Service) is able to administer approvals as required under the Ontario Fire Code” as well as establishing fire safety “while recognizing the importance of Indigenous Sacred Fires in Indigenous culture”.

The newly designated fire sites will be inspected by TFS once a year to make sure the safety standards, as required by the Ontario Fire Code, are being met.

Sacred Fires at undesignated sites are also permitted as long as Indigenous community members contact IAO or TFS for the required safety inspections.

Each location has an Indigenous site facilitator from the community. These site facilitators also came together to serve as a committee of advisors for the City of Toronto. Together with City staff, they picked the locations and advised on materials needed for each Sacred Fire site.

As community members begin to utilize the sites, facilitators will be readily available to guide them through the process.

It is expected that these fire sites will gain the attention of filmmakers and photographers in an artistic city such as Toronto, said the City. Those who would like to capture footage on the locations are advised to seek the permission of the Elder and/or Fire keeper out of respect for the spiritual nature of the sites.

Allan Gardens is located at 160 Gerrard St. E., between Jarvis and Sherbourne streets.