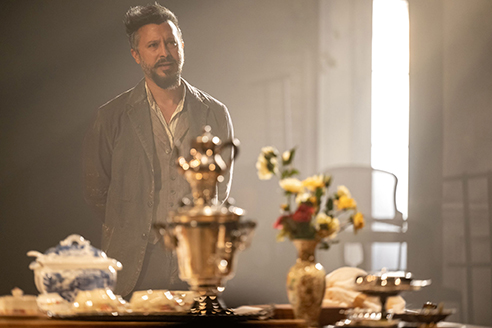 Ali Kazmi plays Astrov in Uncle Vanya, which played at Crow’s Theatre until Oct. 2. Kazmi plays the role of Uday Hussein, eldest son of Saddam Hussein, in the production of Bengal Tiger at the Baghdad Zoo which will run at Crow's Theatre from Oct. 11 to Nov. 6. Photo by Dahlia Katz.

Leslieville actor Ali Kazmi will be playing the role of Uday Hussein, eldest son of Saddam Hussein, in the production of Bengal Tiger at the Baghdad Zoo which is now on stage at Crow’s Theatre.

The play runs at the Carlaw Avenue and Dundas Street East theatre from Oct. 11 to Nov. 6. The Pulitzer Prize finalist and Tony nominated production is a dark comedy based in Iraq in 2003.

“Bengal tiger was supposed to first happen in January,” said Kazmi. “Then Omicron happened, and it all got shut down.”

After production was halted three days before opening, Kazmi said he is excited to finally be able to take on his role in Bengal Tiger at the Baghdad Zoo.

Kazmi also just finished up his role as Astrov in Uncle Vanya, which played at Crow’s until Oct. 2.

“I saw my dad play Astrov back in 2007 in Pakistan” said Kazmi. “So, when I was offered the role, I called my dad, and we cried on the phone together.”

A family devoted to the arts, Sahira and Rahat Kazmi, paved the way for Pakistani cinema and television. Sahira, Ali’s mother, was awarded the Pride of Performance Award by the President of Pakistan. Rahat, his father, has been in dozens of roles, many of which were directed by Sahira.

“That’s the thing about it, back then it wasn’t about the money, there wasn’t even that much,” said Kazmi. “They are just intellectuals who love the arts and that’s one thing I’ve carried with me always.”

Having been in a music video shot by his mother for Pakistani Independence Day at the age of two, Kazmi said he didn’t really get a knack for acting until the age of seven.

“There was a show my mom directed where my father played a doctor and whenever there would be a flashback to him in an orphanage, I would play a younger him,” said Kazmi. “In that moment I looked at everything and realized, this is where I belong.”

That moment is what inspired him to pursue acting to try and create something to continue the family legacy.

“I moved to Canada when I was 25, and I was an actor in Pakistan before that,” said Kazmi. “But you have to create your own magic here.”

After graduating from the Toronto Film School, Kazmi sought and secured his first role where he was a part of a small production performed in the alleys behind Honest Eds.

Kazmi would go on to work at film studios in the Leslieville and East Toronto area and he said he fell in love with the neighbourhood. He moved to Leslieville in 2015.

Kazmi said his love for the stage was re-realized during the COVID-19 pandemic.

“This [Uncle Vanya] is actually my first formal theatre show in Canada,” said Kazmi. “I have been filming for TV but when the pandemic started, I decided ‘I have to go back to the first level.’”

The transition back to the stage has also allowed Kazmi to get more involved with the Leslieville community.

“It really feels like a community, there’s a cute little café there or a bar over there we all love to go to” he said. “I’m a true Leslieville man, I love this place.”