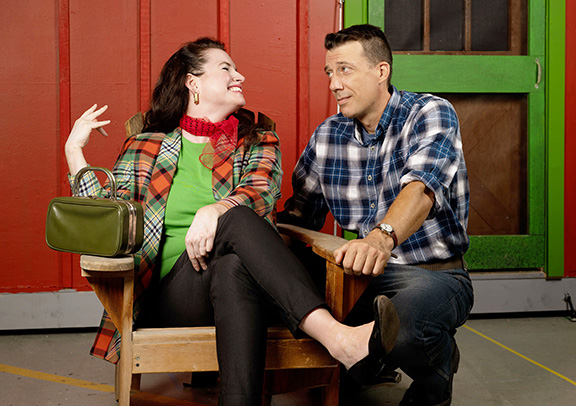 Though on the surface Storm Warning is a romantic comedy with opposites attracted to each other, it is also the story of two damaged people thrown together by fate.

In this two-hander, Emma Currie (Alex Saul) makes her way to Cabin No. 3 in hopes that the solitude will help her complete the charts for the Teddy Marx Orchestra. The year is 1953 and Emma is navigating her way in a man’s world.

Upon her arrival, Emma is as surprised as Jack Forrester (Holm Bradwell) the caretaker of the cabins, that they are not going to be alone for the weekend. The year 1953 was an exciting time, people were finally feeling the war was behind them, and they had hope. Foster has captured this spirit in the play.

However dark and serious some of the topics might be, the dialogue is typical Foster: funny, touching and always very human. There’s something for everyone to relate to.

That humanity is what attracted director David Eden to the script: “Sure, with a Norm Foster play you will have witty dialogue and funny situations, that’s a given. But this is one of his plays that deals with serious topics. Emma and Jack are intriguing characters: he Is the brooding soul haunted by his demons and she always looks on the bright side. She has her demons, too, and Jack tries to help her deal with them. Jack is haunted by his memories of the war and what took place, and this is something that also drew me to the play. My father was also a soldier, like Jack, in WW2, and he also fought in Holland. When Jack finally opens up about his experience, it reminded me of my father and how he never liked to talk about his experiences.”

He will be known to Scarborough Players’ audiences as Harry Bailey in It’s a Wonderful Life, Spike in Vanya, Sonia, Masha and Spike, Frederick Fellowes in Noises Off, Howie in Rabbit Hole, Mr. Wickham in Pride and Prejudice and Mr. Darcy in Miss Bennet: Christmas at Pemberley.

Emma is played by Thea Award winner Alex Saul. Audiences will know her as Sister James in Doubt: a parable, Becca in Rabbit Hole and Elizabeth Bennet in Pride and Prejudice.

Scarborough Players welcome Kelly Booth as costumer capturing the spirit of 1953 and seeking just the right look for each character.

Producer, Katherine Turner notes that one positive coming back from the pandemic and the need for safety allowed Scarborough Players’ to consider a small cast show.

Storm Warning runs from Oct. 7 to 22. To order tickets, or for more information, please visit https://theatrescarborough.com/scarborough-players/productions/storm-warning/ or call 416-267-9292. Tickets must be purchased in advance.