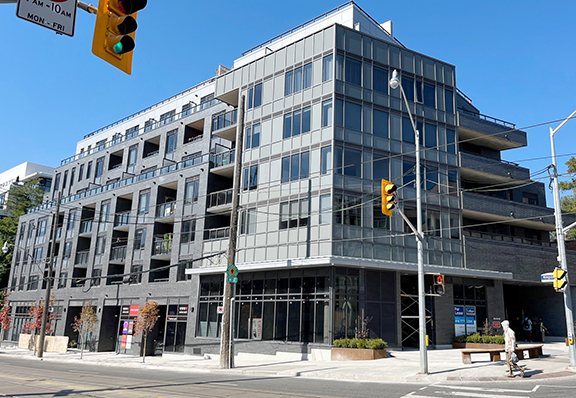 The ORCA Residences are located at the northwest corner of Kingston Road and Main Street. Photo: Alan Shackleton.

In 1990, when developer Kosta Demirov landed in Canada as a Bulgarian refugee he found himself struggling to find stability.

Like many other refugees who enter Canada, he had to endure some hardships that many Canadian citizens will never experience. He spent many nights living at a Salvation Army shelter before meeting Ignat Kanneff, a well-known Mississauga developer.

“When I met him in church, I told him I was living in the Salvation Army and the next day he got me a beautiful apartment in one of his buildings,” said Demirov.

Thirty-two years later, Demirov now finds himself on the other side of the coin.

After years of garnering experience as a home builder and then developer, he is on the cusp of finalizing his biggest project to date, ORCA Residences, a 68-unit rental apartment located at 2 Main St., on the northwest corner of Kingston Road.

Included in the building is ground-floor retail space, and the Waverly Road Montessori School will also be taking space.

As a result of the Russian invasion of Ukraine, a lot of Ukrainians have travelled to Canada seeking refuge. Demirov, who told Beach Metro Community News that he will “never forget Kanneff’s kindness and help” during his own time of desperation, is taking a widely avoided risk in the developer world and offering them a place to call home in his building.

“A lot of Ukranians need places to stay but people don’t want to take them because they don’t have a credit history,” said Demirov. “And I understand how they feel because I was in the exact same situation.”

Demirov said he feels a sense of responsibility to help others in need. Of the 68 units in his building, 19 of them are affordable units according to the City of Toronto’s criteria for such spaces.

“I wanted to keep this spirit of trust, generosity and kindness alive,” said Demirov. “That’s why I decided that we’re going to trust these people and give them shelter even if we don’t know them. So far, they have been great tenants.”

Although these affordable units were not initially intended just for Ukrainian refugees, after hearing the story of one family who struggled to find a home in Canada, Demirov asked them if they knew any other Ukrainian families having similar difficulties.

He now houses “about 24 or 25” Ukrainian families in the building. Some in the affordable units, and others paying market price.

When Demirov decided to start this Main Street project, he opted for a building that utilized green energy. More specifically, the building runs on a geothermal heating and cooling system as well as power generation through solar panels on the roof.

“In addition, the mechanical system is very high-efficiency,” said Demirov.

He was referring to the Variable Refrigerant Flow (VRF) system which uses a refrigerant instead of water to generate energy. According to Demirov, water takes a lot of energy to move it around the building for power supply but the refrigerant, a gas, moves much more efficiently. Although it’s not a new system as it’s seen popularity in Japan and places in Europe, it isn’t as widely used in Canada due to the profit-only mindset of many developers in this part of the world, he said.

“It’s more expensive,” said Demirov. “But when you own the building, it makes sense to make it energy efficient. It makes sense to invest [in a geothermal system]. Whereas when a condo developer is building a condominium, they try to do it as cheap as possible because they are selling it after.”

For Demirov, however, who is owner and building manager at ORCA, the initial investment made more sense because it saves money long term as well as emitting an extremely low amount of greenhouse gasses.

“I care about my contribution to Canada, to Toronto, because when I came people embraced me,” said Demirov.

“When I arrived, I never felt discriminated against or belittled and that’s why I feel responsibility to give that kindness and generosity back to the community. And now with the Ukranians, I just want to help them as much as I can.”