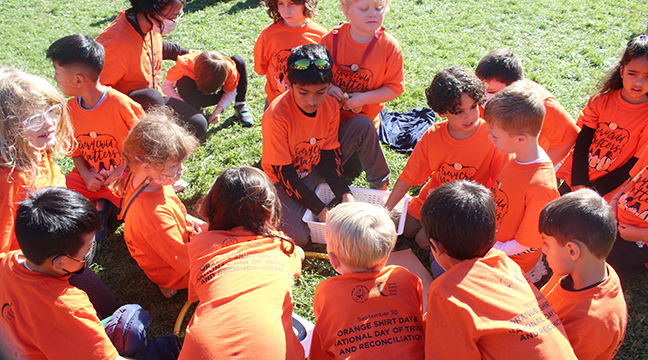 Today is the National Day of Truth and Reconciliation. To commemorate this day, the Toronto District School Board paid tribute to the First Nations, Métis and Inuit families and communities who lost loved ones as a result of Canada’s residential school system.

“We can’t achieve reconciliation without first recognizing our land, and the land in which our school sits,” said Beverly O’Brien, Principal of Withrow Avenue Junior Public School and the adjoined Quest Alternative Senior Public School.

After a moment of silence in which students were encouraged to reflect on the residential school survivors, their families and those who were murdered at the schools, they then proceeded to honour the traditional keepers of the land through land acknowledgment rituals. Students transformed special objects of their choice into art and placed them in a circle, signifying the promise they’ve made to be stewards of the land and an acknowledgement that we are hosted on the lands of the Indigenous peoples.

“We also recognize the enduring presence of First Nations, Métis, and Inuit peoples,” they said as they collectively made the land acknowledgement.

O’Brien said that over the last few years “Withrow and Quest have been on a journey to learn more about Indigenous ways of knowing”.

“We acknowledge that there’s much to learn and continue to do so together,” said O’Brien. “We are grateful to everyone for gathering at our school for the National Day of Truth and Reconciliation and Orange Shirt Day.”

Students in attendance sported bright orange attire, an ode to residential school survivor Phyllis Webstad. The reason for the colour choice was explained to them by relating Webstad’s experience in a residential school.

In 1973, when Webstad was six years old she went to a church-run residential school in Williams Lake, B.C. Her grandmother had gifted her a new orange shirt for her first day of school which she proudly wore. Upon arriving at the school, much to her surprise, the orange shirt was confiscated and her hair was cut.

“This made Phyllis feel that no one cared for her and that her feelings didn’t matter,” explained the student. “Phyllis’ orange shirt is a symbol of so many losses experienced by children who were sent to residential schools.”

The student’s were engaged creating their art tributes in the circle, and many showed a clear comprehension of the day’s purpose.

“I think that the importance of this event is that we are recognizing what happened and we are trying to take steps forward to ensure that the horrors of the residential schools never happen again,” said Noelle Koffman, a student at Quest.

Koffman said that in order for this reality to be faced, the public must continue to talk about the past and learn about the original owners of the land who “terrible things” were inflicted upon.

Following the tribute, the arranged objects remained in position as an outdoor gallery for the remainder of the day. Students then proceeded to their respective classes where education about Canada’s Indigenous peoples and the legacy of Orange Shirt Day continued.