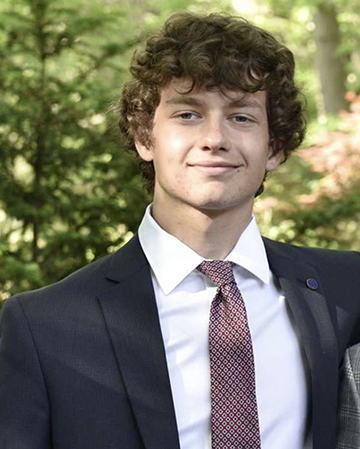 Local resident Matthew Stansfield is organizing the Beaches Jumpstart Fundraiser on Oct. 7 at the Balmy Beach Club. The event will raise money for Jumpstart Canada, which supports young people who face financial challenges to participating in sports and recreational activities. Photo: Submitted.

A local teenager is organizing an event next week to raise money for kids who face financial challenges and cannot afford to take part in recreational activities.

The fundraiser on behalf of Jumpstart Canada, is taking place at the Balmy Beach Club on Friday, Oct. 7, at 7:30 p.m.

Growing up in Toronto’s east-end, 18-year-old Matthew Stansfield learned about the values of having an outlet as a child. When he was nine, he joined a sailing club and eventually became an instructor, an activity he revisits in between school semesters at Western University where he currently studies business.

“Sports were a big part of my life,” said Stansfield. “They always were and still are. And I was looking for a way to give back and thought this would be a fun way to raise money [for the cause].”

Stansfield decided to rent out a venue with his own money and hired local band, Jade Monkey Trio, to perform.

He told Beach Metro Community News that all the proceeds are going directly to the Jumpstart Foundation, an organization focussed on helping kids participate in extracurricular activities.

“It’s a chance to boost their self-esteem. A chance to nurture their creativity and help them do better in school,” reads a statement on Jumpstart’s website. “It’s a chance to connect them to their communities, so they can be a part of something bigger”

Jumpstart funds more than 65 different activities. For every $70 raised from Stansfield’s fundraiser, one child will be granted access to play a sport for an entire season.

“As a sailing instructor I really like to see kids feel the way I felt about the sport,” said Stansfield. “I really see, as they improve over the course of the summer, the boost of confidence they get.”

Stansfield said that participating in sports is an important part of childhood because of its many positive benefits, most notably making friends. He also highlighted the stress relieving aspect of taking part in a physical activity which he enjoyed during his time playing hockey as a younster.

“For kids, mental health, just as much as physical health, is really important,” said Stansfield . “Sports have also taught me the importance of hard work and sticking with it.”

The Malvern Collegiate Institute graduate was inspired to organize something for the children due to his experiences during the COVID-19 pandemic. He revealed that the inability to play any sports during that time took a mental toll on him.

“That was my Grade 12 year and I was looking forward to playing all the high school sports,” he said. “Having that taken away was pretty frustrating for me and so I felt what it was like to not be able to play sports.”

Stansfield said that he then realized there were millions of people who were unable to play sports not because of COVID, but because their families simply couldn’t afford it. After reflecting on how fortunate he was to be able to play sports all his life, he was inspired to begin this initiative.

Tickets for the event are available for $50 per person. The purchase includes admission and one drink ticket. There will also be a silent auction, one of the prizes being a signed Jonathan Toews hockey sweater. To order tickets, please go to https://www.eventbrite.com/e/beaches-jumpstart-fundraiser-tickets-409526152747

Anyone who is unable to make it to the fundraiser but still wants to contribute to the cause can still donate through the Beaches Jumpstart Fundraiser GoFundMe campaign at https://www.gofundme.com/f/beaches-jumpstart-fundraiser