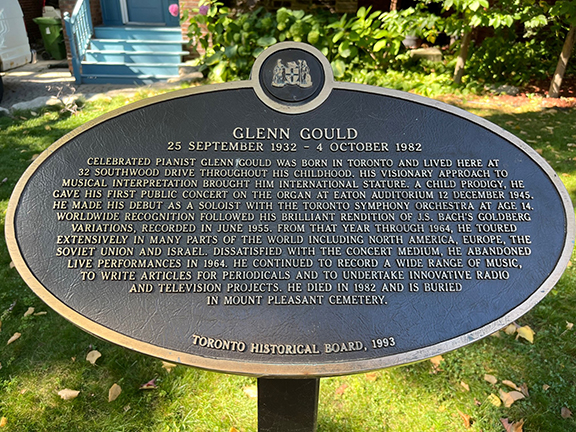 The plaque in front of the late Glenn Gould's family home at 32 Southwood Dr. Gould attended Williamson Road Public School and Malvern Collegiate. Sunday, Sept. 25, marks what would have been his 90th birthday.

Beacher and legendary pianist the late Glenn Gould will be remembered and celebrated on what would have been his 90th birthday weekend.

Glenn Chadwick of The Beach and East Toronto Historical Society said no formal events are planned locally for the actual day of Gould’s birthday (Sept. 25), but he encouraged residents to learn more about Gould and visit the plaque in front of his family home on Southwood Drive.

Gould was a world-renowned pianist and child prodigy who released numerous recordings of his works over the decades. He was born on Sept. 25, 1932 in Toronto, and died on Oct. 4, 1982. As youngster he attended both Williamson Road Public School and Malvern Collegiate.

As well as a pianist, Gould was also a writer, composer, broadcaster and composer.

The plaque in front of his family home at 32 Southwood Dr. reads:

“Celebrated pianist Glen Gould was born in Toronto and lived here at 32 Southwood Drive throughout his childhood. His visionary approach to musical interpretation brought him international stature. A child prodigy, he gave his first public concert on the organ at the Eaton Auditorium 12 December 1945. He made his debut as a soloist with the Toronto Symphony Orchestra at age 14. Worldwide recognition followed his brilliant rendition of J.S. Bach’s Goldberg Variations, recorded in June 1955. From that year through 1964, he toured extensively in many parts of the world including North America, Europe, the Soviet Union and Israel. Dissatisfied with the concert medium, he abandoned live performances in 1964. He continued to record a wide range of music, to write articles for periodicals and to undertake innovative radio and television projects. He died in 1982 and is buried in Mount Pleasant Cemetery.”

Chadwick said events have been planned downtown on Sept. 24 and 25 to mark the occasion. Gould at 90 is organized by the Glenn Gould Foundation and will include free concerts and the announcement of the winner of the Glenn Gould Prize.

Please note that while the concerts are free, registration is required.