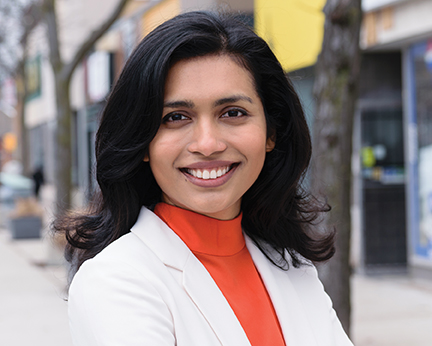 MPP Doly Begum is speaking out after a rash of gun-related incidents in the southwest Scarborough area this month.

A local MPP is speaking out after a rash of gun-related incidents in the southwest Scarborough area this month.

Following the most recent shooting which claimed the life of 17-year-old Zaybion Lawrence in the Gilder Drive and Eglinton Avenue East area, which is just north of her riding’s boundary, Scarborough Southwest MPP and Deputy Leader of the Ontario NDP Doly Begum released a statement addressing the incidents.

“The senseless loss of life to gun violence in our community weighs down on us,” said Begum. “It weighs down on me as someone who not only has the immense privilege of serving you, but also as a member of the community.”

She also addressed a shooting which injured a man in the Kingston and McCowan roads area on Sept. 16 and the recent hold and secure order imposed on three southwest Scarborough schools earlier this week.

According to Toronto Police, an individual carrying a gun was witnessed “running towards a nearby school” in the St. Clair Avenue East and Kingston Road area on the afternoon of Tuesday, Sept. 20. The suspect was a teen believed to be aged 16 to 17.

“What parents, community members, teachers and students felt that afternoon as they awaited news about the incident is unimaginable,” said Begum.

She released her statement on Friday, Sept. 23, to assure residents in Scarborough Southwest that she will continue to be an advocate for gun control and violence prevention.

Data from the Toronto police Guns Seized Twitter account indicates that in 2021, 86 per cent of all handguns used in crime within the city were illegally brought in from the United States. The proposed federal legislation, Bill C-21, increases the maximum penalties for firearm offences from 10 years to 14 years in an attempt to gain control of Canada’s illegal guns problem.

Begums promised to present solutions and legislation to all levels of government “that addresses this endemic issue, including stopping the flow of illegal guns into our province”.

“I know that the solutions that we need for our communities are not simple, which is why I ask those in power across our city and province to take a mindful and creative approach that focuses on harm reduction, building hope, and support,” she said.