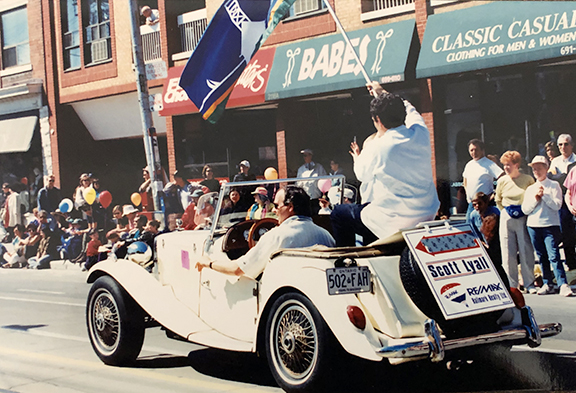 Local realtor Scott Lyall (1954-2022) is remembered for his service to the community, including driving his vintage MG convertible in the Toronto Beaches Lions Easter Parade. Photo: Submitted.

Local realtor Scott Lyall is being remembered for his dedication to his family, his community and his business clients.

“He was a passionate guy in all that he did. He was fully engaged in his business, his family and his community and he didn’t slack on any of those pillars. That’s the kind of guy he was, he had a real affinity for people,” said Ken McLachlan, a longtime friend and business associate of Scott’s.

Scott was a realtor with RE/MAX Hallmark Realty on Queen Street East in the Beach for decades. Prior to that he had worked locally with Camelot Castle Realty in the Beach.

McLachlan, owner of RE/MAX Hallmark, said Scott was “a dynamite” real estate agent who always worked hard to get his clients the best deal possible.

“As a real estate agent he was a deal maker. He was a dynamite agent and passionate for his clients,” said McLachlan of Scott. “He was the most generous guy in the world, but you didn’t want to be facing him in a deal because he would beat you.”

Scott’s generosity and community spirit was reflected in his many years with the East York Rotary Club which he joined in 1996. Within two years, he was the club’s president.

“He thought Rotary’s role in the community was just so important,” said Robert Bryers, co-president of the East York Rotary Club. “Scott is so revered by club members. Anything the club did, Scott was involved in.”

Bryers especially remembers the energy and enthusiasm Scott brought to the club and its service to the community.

“One of his characteristics is he always had a smile. If something needed to be done, he would make sure it would get done,” said Bryers.

Scott’s work on the Rotary Club’s TV Auction, a major fundraiser for the club’s community programs for years, was particularly memorable for Bryers.

“An important aspect of the success of the auctions was the number of items that Scott was able to bring in. It was literally by the truckload. He would rent a truck to bring it all to the central warehouse.”

Through his involvement with Rotary, Scott also supported food banks and hosted foreign exchange students in his home.

Scott was also a strong supporter of Michael Garron Hospital (formerly known as Toronto East General Hospital) on a personal basis and also through the East York Rotary Club, said Bryers. Scott was also a member of the hospital’s Foundation for more than 12 years.

“For Scott, the club’s involvement and his own personal involvement is what really helped with supporting the hospital,” he said.

One of the hospital fundraisers Scott spearheaded was the annual golf tournament, a sport he loved to play as well.

“Scott loved relating stories about his golf tournaments or poker adventures, some successful and some not,” remembered Bryers. “I remember one golf tourney that he won, he donated all the prize money to the East York Rotary Club.”

He also took part in The Longest Day of Golf events to raise funds for the Canadian Cancer Society. In both 1999 and 2000, he played 225 holes of golf in one day at the event which raised a substantial amount of money for the Cancer Society.

For his work with Rotary, Scott was awarded the prestigious Paul Harris Fellowship which is one of the highest awards that can be given to club members.

Bryers said it was an honour deservedly earned by Scott, who was always prepared to do whatever was necessary for Rotary Club projects.

He remembered how hard Scott worked on tree planting projects undertaken by the club.

“Scott would help bring the students to the site and teach them how to plant. You always count on him no matter what the weather – and one day we planted trees in all four seasons. Scott was always there,” said Bryers.

“He had that touch where he could relate to everyone.”

In his honour, the East York Rotary Club has established a Scott Lyall Memorial Fundraiser. Contributions can be made by going to www.eastyorkrotary.org/page/give

Scott’s community involvement also translated to his support of events such as the Beaches International Jazz Festival and the Toronto Beaches Lions Easter Parade. For years, he was known for driving his vintage MG convertible in the Easter parade.

He is survived by his wife Jan, daughter Ashleigh, daughter-in-law Jennifer, and brother Ian.

A Celebration of Life for Scott Lyall will be held on Thursday, Sept. 22 at the Toronto Hunt Club, 1355 Kingston Rd., from 2 to 5 p.m. Those planning on attending should know the club’s dress code is business casual, no denim. There is also very limited parking so taxis or ride share options are advised.