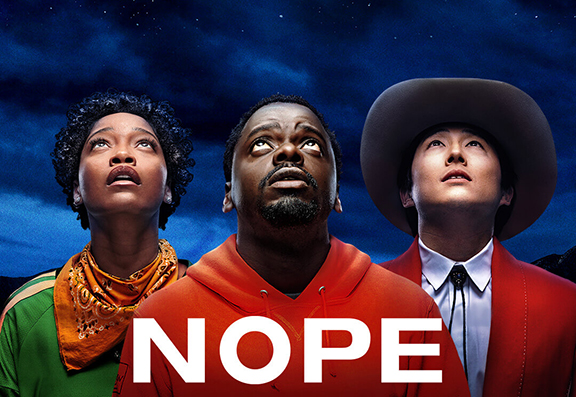 Local student Brady Burkett shares his reviews of upcoming movies showing at the Fox Theatre on Queen Street East in the Beach. Here is his review of Nope.

Jordan Peele’s brand new exciting, genre-bending blockbuster, Nope, had almost everything going for it for the majority of its runtime.

It tells the story of O.J. Heywood and his sister Emerald, descendants of the first man to ever be put to film and owners of the first black-owned horse ranch in Hollywood. One night, six months after their father passes away from a freak accident, horses begin to disappear from their ranch, and they eventually come to the conclusion that some sort of extraterrestrial force is involved. The film centres around their attempts to capture the creature on film.

It’s an exciting mashup of genres, elements of comedy, horror, thriller, and action all combining to create something that pays tribute to its inspirations (namely early Spielberg like Jaws and Close Encounters of the Third Kind) whilst still remaining entirely fresh.

The movie is constantly subverting your expectations in creative ways, and a reveal about the alien spaceship halfway through the movie is especially striking.

In terms of acting, everyone here does an excellent job, although special recognition has to be given to Keke Palmer and Steven Yeun, who both absolutely crush their roles.

Yeun especially lends a surprising amount of emotional poignancy and depth to his disappointingly small role (which we will get to in due time). That said, there still isn’t really a weak performance out of the bunch.

The overall direction and cinematography is also absolutely spectacular. There are so many memorably striking moments, and the cinematography does justice to every single one of them. This contains one of the best opening shots that I’ve ever seen in a movie, immediately drawing you into the story and getting you wondering.

I wish I could give out the same glowing compliments to the music, which often felt disappointingly generic for a movie like this.

“So Brady,” you say, “You sound, music aside, like you’re in love with this movie! It sounds awesome!” And this was true… but as I said, for the majority of the runtime.

You see, Nope, up until its climax, really feels like it’s building towards saying something really important, but the themes and ideas it sets up have an incredibly disappointing lack of payoff.

The entire film has two plots running concurrently with one another. I’ve already gone over the first one, but there is a subplot involving Yeun’s character and a disaster that happened on a children’s sitcom years ago. Although the main plot is excellent in its own way, this part of the story is legitimately masterful. Frighteningly realistic, tense, and extremely powerful. This subplot is given a fair bit of focus for the majority of the film… before its abruptly dropped two-thirds of the way in.

I can see the puzzle pieces there for how this subplot connects to Nope’s central themes, but the film gives up on fitting them together halfway through and instead just focuses on the still good, but ultimately far less interesting main storyline. It never feels like it quite fits, always just a little tacked on to the existing movie.

Nope is still very good, do not get me wrong. But I couldn’t help leaving the film unsatisfied with where it had left me.

It gave me a lot to think about, but not in a way where it ever felt fully cohesive. The pieces are there, but the film simply refuses to put them together, making for a rather bizarre experience.

I would recommend it to others, and I would certainly watch it again, but Nope ultimately ends up a mild disappointment in my eyes.