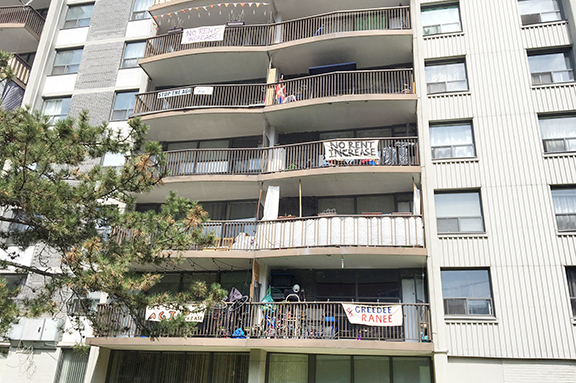 Ontario’s NDP has announced plans to reintroduce the Rent Stabilization Act: Pay What the Last Tenant Paid. The bill serves to prohibit landlords from raising the rent on new tenants beyond the legal limit.

The private members bill is being put forward by MPPs Jessica Bell (University-Rosedale), Bhutila Karpoche (Parkdale-High Park), Joel Harden (Ottawa Centre) and Terence Kernaghan (London North Centre). The plan to reintroduce the bill at Queen’s Park was announced by the Ontario NDP at a press conference on Sept. 7.

“As the party that brought rent control to our province, ensuring that people can have fair and affordable access to housing, especially in their own neighbourhoods and communities, is a top priority,” Ontario NDP Deputy Leader and Scarborough Southwest MPP Doly Begum told Beach Metro Community News this week.

“Housing is a human right, yet people, especially working-class families, are being priced out of their own communities because of illegal rent hikes, gouging, and unfair evictions,” she said.

Beaches-East York Liberal MPP Mary-Margaret McMahon said there is a housing crisis in the province and all options need to be considered to address the issue. She said she would need to see more details of the NDP’s Rent Stabilization Act before making a decision on whether to support it.

“We’re in a housing crisis. I think we’re all aware of that,” McMahon told Beach Metro Community News.

“We need every tool in the toolbox to solve this. We can’t have empty homes while people are dying on our streets.”

After first being elected in 2018, Ontario Premier Doug Ford and his Progressive Conservative government outlined a legislation that allowed all newly built units—or units occupied by a tenant for the first time—to be exempt from rental price increase restrictions. This legislation replaced the previous Ontario Liberal government’s Rental Fairness Act which had expanded rent control policies to include all private residential units. Critics of that act said it prompted some investors to abandon plans to build rental units due to limited profit potential.

The Progressive Conservative government said the goal of its legislation was to encourage developers to build more rental housing by giving them an incentive on their investments.

However, in announcing the NDP’s motion this month, Bell said that even if developers invest in new units, residents will not be able to afford living in them as landlords have free reign on how much they can increase rent when taking on new tenants.

“People in Ontario are smack in the middle of a housing crisis, and Doug Ford’s insistence on allowing landlords to hike the rent unchecked between tenants is a major contributor to driving up market rental prices, ” said Bell in the Sept. 7 announcement of the plan to introduce the motion.

The province’s rent increase cap for next year has been set at 2.5 per cent for existing tenants. However, Ontario’s policies allow landlords to set whatever rental price they desire once a unit becomes vacant or a tenant’s lease expires, the NDP said.

The lack of rent control for new tenants has created the term “renoviction” which describes a practice in which landlords turn over tenants for new ones by citing a need for renovations as an excuse for removing a lease holder.

If the NDP’s Rent Stabilization Act is approved, rent increase controls would be tied to the unit rather than the individual living in it.

What’s better than rent control? A tax on vacant lots and unoccupied buildings. While rent control makes it less attractive to supply accommodation, a vacant-property tax makes it less attractive NOT to! Such a tax, although sometimes called a “vacancy tax”, is not limited to what real-estate agents call “vacancies” — that is, properties available for rent. It also applies to vacant lots and empty properties that are not on the rental market, and is designed to push them onto the market and get them tenanted.

By the way, the desired *avoidance* of the vacant-property tax would initiate economic activity, expanding the bases of other taxes and allowing their rates to be reduced, so the rest of us—including landlords with tenants—would pay LESS tax!