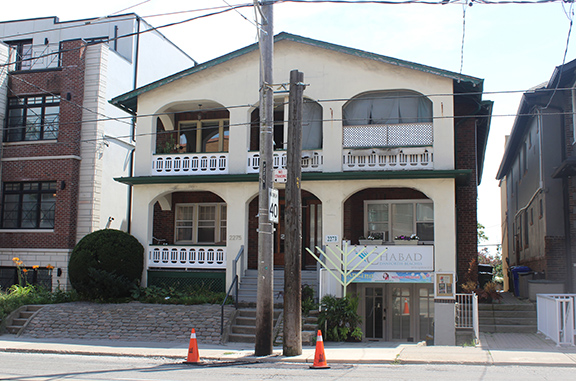 A proposal to alter the west side of this building at 2273-2275 Queen St. E. with a multi-storey addition is awaiting a hearing date before the Toronto and East York Committee of Adjustment. Photo: Beach Metro Community News file photo.

It’s been almost one year since the last hearing, but neighbours Rabbi Sholom Lezell and Ed Wilson still await a decision regarding the planning dispute at their adjoined duplex building at 2273-2275 Queen St. E. in the Beach.

Last October, the Toronto and East York Committee of Adjustment deferred the case after Lezell requested more time to revise the proposed changes to the building.

“This file is still listed as deferred, as we await for the agent to satisfy requirements set out in the October 2021 deferral, and any subsequent materials,” said a CoA representative in a written response to Beach Metro Community News. “As such, we do not have a hearing date to provide.”

The issue began following a proposal by Lezell to change the facade on his half of the duplex. This move was challenged by Wilson, who owns the other half of the building. Wilson said he was concerned that the building would lose the aesthetics that made him decide to live there more than 40 years ago.

The duplex was built by the Price Brothers in 1927 and has their signature gable roof design and distinct verandas.

The original proposal, which was designed with the intentions of expanding Lezell’s Synagogue and Jewish school, included a two-storey addition with a roof deck, and a four-storey addition at the front and rear of the building.

Following the October 2021 deferral, however, it has been redesigned to keep a “Price Brothers-esque” look in the front – Wilson’s main concern. That redesign was submitted in May of 2022, and all parties are now waiting on a hearing date for a ruling to be made by the CoA.

Lezell confirmed that the redesign has been completed and they are now waiting for a CoA hearing date to be set.

“They haven’t set a hearing date yet so I don’t know,” said Wilson about the expected decision. “Last I heard it was maybe [going to happen] in October.”

Wilson is hopeful about preserving the building’s facade in front. Although he was unable to get heritage status for the duplex which would prohibit any of the proposed changes, the building is protected under the Kew Beach Precinct Urban Design Guidelines.

According to the guidelines, the sub area, located between Woodbine Avenue and Glen Manor Drive, is the “commercial and retail heart of the Beach”.

The guidelines describe the area as the “precinct on Queen Street East which attracts the most amount of tourists and visitors” thanks to the small town ambience. As a result, the guidelines suggest that “rows of original Price Brothers buildings at the east end of this precinct are important for their cultural value and should be preserved”.

Although Wilson expects to win the hearing concerning the building’s front facade, he anticipates a loss in the battle about loss of sunlight in the back of the building as a result of the increase in height in the rear.

“My guess is that the CoA will say ‘Sorry that’s life in the big city’”, said Wilson.

If approved, the building will soon sport a new look; one that combines the old with the new.

The left side of the building will have the original veranda and gable design that is well known to Queen Street East, while the right side will feature a modern, glass finish where a balcony currently lies. From the street, members of the community will be able to look directly into the new lobby of a Jewish Community Centre–Chabad Beaches.

For more information on the Toronto and East York Committee of Adjustment and upcoming meeting dates, please go to https://www.toronto.ca/city-government/planning-development/committee-of-adjustment/toronto-east-york-schedule/