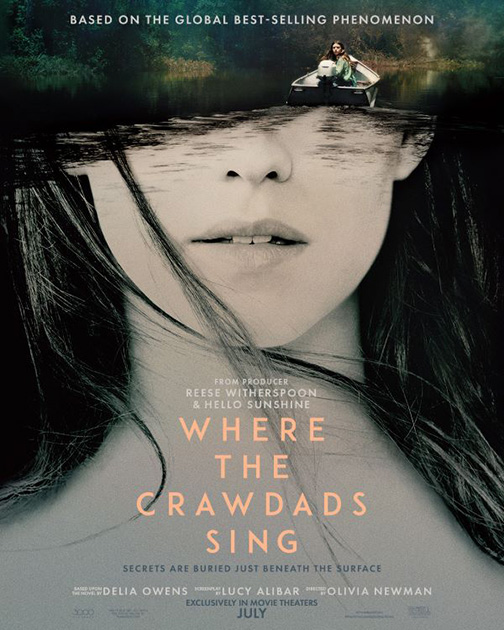 Where the Crawdads Sing is playing at the Fox Theatre on Queen Street East in the Beach from Sept. 9 to 15.

Local student Brady Burkett shares his reviews of upcoming movies showing at the Fox Theatre on Queen Street East in the Beach. Here is his review of Where the Crawdads Sing.

Before going to see Where the Crawdads Sing, I made the following prediction to my mother: “It’s going to fade into a shot of the marsh. Then, it’ll cut between different parts of the marsh as she begins verbatim narrating the opening lines of the book as the title appears.”

The film itself did not prove me wrong, although I did not predict the generic white Times New Roman text overlaying the images of the marsh used for the opening credits.

This is the primary issue with Where the Crawdads Sing, and a mistake that many book-to-movie adaptations make. Even if the story is interesting on its own, it should be told in a format that takes advantage of the medium it’s being told in, and Where the Crawdads Sing does not do this. It’s just the same story as the book, told in a completely uncreative and uninteresting way.

I would like to make clear that I have yet to read the novel, but I can see how the story could work better in the format of a book.

In writing, it’s very easy to make locations feel like characters themselves, through rich descriptions and metaphorical characterization, and that is very clearly the intention of the story. The marsh is intended to be characterized and felt as much as everyone else involved.

The medium of film can also accomplish this, through cinematography, lighting, editing, and other techniques.

The problem with Where the Crawdads Sing is that it doesn’t use any of these, and instead opts to use its existence as a movie as a means to an end. There are no creative or thoughtful decisions being made in the directing department here, and it feels like it was filmed on autopilot.

With that out of the way, what of that story?

Both of these elements are fairly standard on their own, but the mixing of them lends the story an interesting contrast that helps it rise above the sum of its parts.

Kya herself is a solidly likeable and identifiable lead, but ultimately ends up being the only character with any real dimension.

The character that gets this the worst is her love interest Tate, whose entire personality boils down to simply being really, really, really, really, exhaustingly nice. He is a completely flawless being that only exists as someone that Kya can fall in love with.

The performances are solid across the board, with nobody particularly standing out.

The film’s standout moments are in its ending, which legitimately made me a little misty-eyed and reminded me of a lesser version of the opening of Up (which is more of a compliment to Up than it is a complaint about this movie).

And the movie, in its final moments, manages to pull a legitimately surprising twist that felt properly foreshadowed and earned whilst remaining shocking.

Overall, Where the Crawdads Sing could have been great, and in some moments (like its ending) this shines through.

However, the solidly investing story is marred by generic, boring, bog-standard direction.

It’s an interesting story told in an uninteresting way, never taking advantage of the medium it’s told in, ultimately ending up nothing more than “OK”.