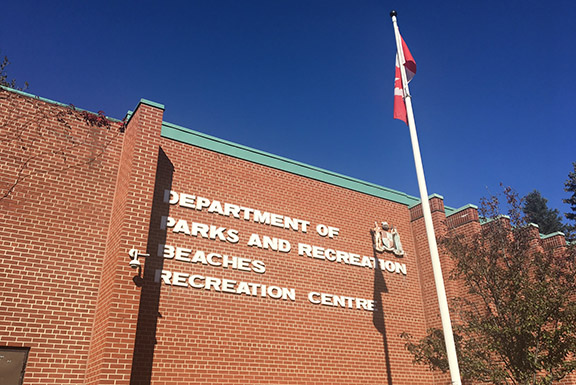 The Beaches Recreation Centre opened in 1972 and will celebrate its 50th birthday with a number of events on Saturday, Sept. 24.

Since 1972, many local residents have stepped foot into the red brick castle that sits near the corner of Lee Avenue and Williamson Road. This year, Beaches Recreation Centre is celebrating its 50th anniversary.

The recreation centre has been a second home to Beachers of all ages, serving the community as a place where everyone can stay active, meet new people, learn a new craft and make lifelong memories.

It is a place where everyone is welcome, giving people an escape from the realities of life. Two people who know this place better than anyone are Frank Domagala and Roland Roushias who are the Community Recreation Programmers (CRP) at the centre.

In the early 1970s, Frank and Roland were some of the first kids to step foot into Beaches Recreation Centre taking different classes from drama to wrestling. Between playing games of hockey showdown on Saturday mornings, trying to win the game and a prize from the original CRP, Alf Grigg, the two have been involved with the centre since day one.

Both Frank and Roland have seen so much change over the years. However, much of the community remains the same.

“It’s the people that come in to use the rec centre; they’re still the same. They’re still kids, adults, seniors, youth but it’s been a place where people choose to spend their free time,” said Roland.

The centre is a local spot that provides a sense of community. “It’s not on a main street, it’s not a giant facility, it’s shared use, so there is a community that’s been instilled here,” said Frank.

From generation to generation, Beaches Recreation Centre has been a significant part of the lives of families within the community.

Joann Knox and her daughter Sarah Hendershott along with her children, Cameron and Emery, are one of those families.

Joann was one of the original members of the Beaches Recreation Centre Advisory Council. Her kids, Sarah and Aaron, grew up as “rec rats” in programs such as arts and crafts, ball hockey, and swimming lessons. Sarah even worked at the centre as a teenager.

Now, Cameron and Emery are having similar childhood experiences by staying active and having fun at the centre.

Between gymnastics, cooking classes and the Spring Sprint, which started as a small fundraiser and now has become a springtime staple in the community with hundreds of people running every year, the centre is always a busy place.

For 50 years, Beaches Recreation Centre has provided people with a sense of community and a place where people from all walks of life have the chance to create memories that last a lifetime.

On Saturday, Sept. 24, the Beaches Recreation Centre will be celebrating its 50th anniversary with a community event.

The celebration will show how the community has evolved over the last 50 years and the role that Beaches Recreation Centre has played in that.

The celebration will be a throwback to the last 50 years of community and recreation. Between seeing familiar faces that have been in and out of the centre in the last 50 years along with old school recreation activities and a dance featuring live music for the adults afterwards, it will be a chance for everyone to see the community that’s been brought together through the Beaches Recreation Centre.

At the end of the day, “recreation should be fun and it should be social and if you’ve touched on those two points there’s nothing else to do,” said Roland.

Fifty years later, Beaches Recreation Centre is still touching those two points and creating memories that will last another 50 years.

The Beaches Recreation Centre’s 50th anniversary celebrations on Sept. 24 will include an open house from 11 a.m. to 2 p.m. with a barbecue and games for the kids.

In the evening, from 7 to 11 p.m. the Advisory Council will be hosting a dance with live band and DJ. Tickets for the dance are $50/pair and can be purchased at the open house or in advance from an Advisory Council member.