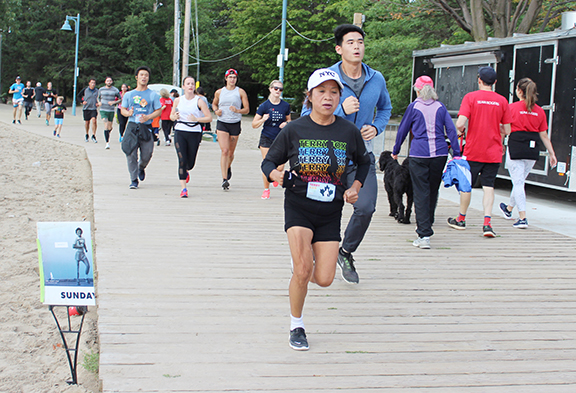 Runners take part in the 2019 Terry Fox Run along the Boardwalk. The 2022 version of the Beaches Terry Fox Run will take place on Sunday, Sept. 18.

The 42nd annual Beaches Terry Fox Run is back as an in-person event.

The event offers the option to do it in person or virtually so that everybody can participate. People can decide to do a five-kilometre walk or run or a 10-kilometre bike loop.

Today, his legacy lives on, having raised more than $850 million since 1980, and bringing hope and health to millions of Canadians dealing with cancer.

Bridget Keroglidis is organizing the Beaches Terry Fox Run this year and said that as a teacher, she has also always done the run at school with her students.

It’s hard not to be inspired by Terry Fox, said Keroglidis, and when cancer affected her family it took on a new meaning for her.

The theme of this year is I’m Not a Quitter, because Terry Fox famously said, “Nobody is ever going to call me a quitter.”

Keroglidis said she thinks the theme will resonate with people.

“Because we’re all going to face hard things in our life and we have that example of how Terry didn’t give up, and he kept going,” she said. “So if he can do it, we can do it.”

Keroglidis encourages people to participate and fundraise as all of the money goes towards supporting cancer research through the Terry Fox Foundation. The Beaches Terry Fox Run route is accessible for people cycling, with strollers, or using wheelchairs.

To register or for more information, please go to https://terryfox.org/