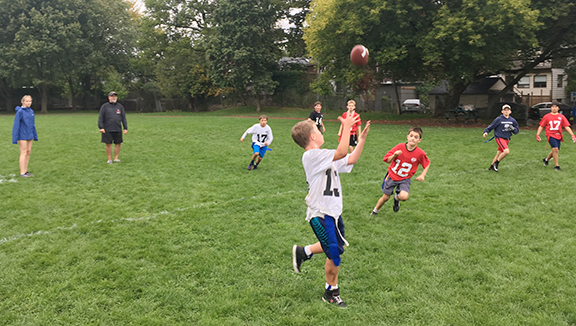 The Southeast Toronto Flag Football league will begin its season on Sept. 24 and is now accepting player registrations from youngsters ages 9 to 13. Games will be played at Woodbine Park. Photo: Submitted.

Play in the league is set to begin on Sept. 24 and the season will run for six weeks.

Youngsters between the ages of 9 and 13 are invited to register for the season which will include training sessions and games.

“It’s geared to kids with a big focus on kids who may not have played football before,” said Daniel Barbieri of the Southeast Toronto Flag Football league. “We will go through the fundamentals and learning about the game.”

One of flag footballs biggest appeals for young players (and their parents) is that it is a non-contact sport so fears of concussions and other injuries are not the same as they would be for those playing full contact minor football.

The flags are attached by Velcro on a belt around the players hips and are pulled off by opponents. There is no tackling, hitting or physical contact in flag football.

“That’s the thing, it’s flag football and with what we know now about concussions and other injuries, many parents are hesitant to have their kids playing tackle,” said Barbieri, who is a Beach resident.

He said flag football has most of the elements people love about regular football, without the physical battles on the lines and the hard hitting.

The flags are also an improvement on the old touch football system in which disputes would sometimes arise as to whether a person had actually been touched. “The flags eliminate all of that,” said Barbieri.

The Southeast Toronto Football League will be playing its games at Woodbine Park this fall, dividing the field into quarter sections for the youngsters to play their games.

Teams are made up of five players, with three or four runners or pass receivers and a quarterback on offence; and four defensive back and a pass rusher on defence.

Barbieri said the emphasis is on having fun and enjoying the game.

“The goal is for them to see football as the great sport that it is,” he said.

For information on registering for the Southeast Toronto Flag Football league, please send an email to southeasttorontoff@gmail.com