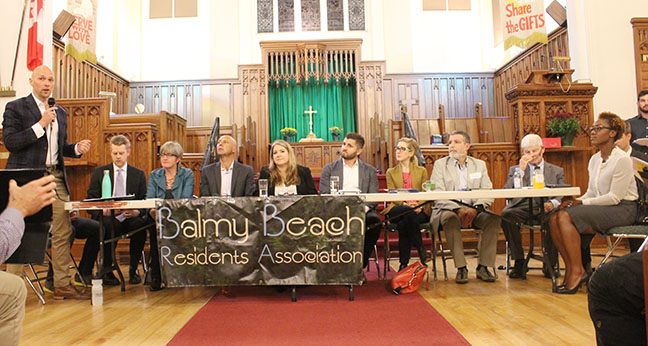 This Beach Metro Community News file shot shows a debate in 2018 among candidates seeking the Beaches-East York council seat in that October's municipal election. Sixteen candidates ran for that seat in 2018. So far this year, with one week left until the registration deadline, three candidates had signed up to run for councillor in Beaches-East York.

As Toronto’s municipal election approaches this fall, some of the races for local council seats are starting to take shape. But with the deadline for registering to run only one week away, there seems to be a notable lack of candidates seeking elected positions as compared to the last city election in 2018.

Toronto voters will go to the polls on Oct. 24 to elect councillors, school board trustees and a mayor.

Yet, up until a week ago, more than a quarter of Toronto’s wards had no challengers for council membership. Today, one week before the Aug. 19 deadline to sign up to be a candidate, two wards are still without challengers as of noon on Aug. 12. (They are Ward 2 Etobicoke Centre and Ward 17 Don Valley North.)

“I think it’s a sorry state of affairs for Toronto,” Myer Siemiatycki, Professor Emeritus at Toronto Metropolitan University, told the CBC recently. “Democracy doesn’t work well when the people don’t participate, where there isn’t an accountability loop. And that’s what we’re looking at now.”

Here is a closer look at how the municipal election is unfolding so far in the wards of Beaches-East York, Toronto-Danforth and Scarborough Southwest.

Although this year’s election has seen a low turn-out with many wards having only one or two challengers, this is not the case in Ward 20.

Scarborough Southwest boasts six challengers so far for the incumbent councillor, Gary Crawford, who is seeking his fourth term on Toronto Council.

His resume holds weight as he was appointed by Council to be Budget Chair. He is also a member of the Mayor’s Executive Committee.

Crawford’s most notable challenger is Lorenzo Berardinetti, who served as the Liberal MPP for Scarborough Southwest from 2003 to 2018.

Prior to that, Berardinetti had 15 years of experience as both a City of Scarborough and then (after megacity amalgamation) City of Toronto councillor.

Another candidate who brings political experience to the table is Parthi Kandavel. He is a teacher who has served as Scarborough Southwest’s Toronto District School Board Trustee for the past eight years.

Also registered to run so far for the council seat in Scarborough Southwest are Philip Mills, Kevin Rupasinghe, Sharif Ahmed, and Malik Ahmad.

Unlike the incumbent for Scarborough Southwest, incumbent Beaches-East York Councillor Brad Bradford only has two challengers registered to run against him as of noon on Aug. 12.

They are Steven Thompson and Jennie Worden.

First elected in 2018 in race that featured 16 candidates running for the Beaches-East York councillor position, Bradford is seeking is second term on Toronto Council in this fall’s election.

As of noon on Aug. 12, Fletcher had two challengers registered to run against her. They are Denise Walcott and Wali Abro.

Alongside elections for councillors are the school board trustee elections.

With Ward 18’s (Scarborough Southwest) Parthi Kandavel opting to run for councillor this year, five new faces have set their sights on replacing him on the Toronto District School Board (TDSB). They are Guled Arale, Malika Ghous, Naser Kaid, Sonny Mir, and Anna Sidiropoulos.

Ward 16 (Beaches-East York) incumbent TDSB Trustee Michelle Aarts so far has no challengers for the position.

In Toronto-Danforth, (Ward 15) incumbent TDSB Trustee Jennifer Story will not be running again. She had been the TDSB trustee for the ward since 2014.

Campaigning to replace her so far are Sara Ehrhardt and Matt Farrell.

In Ward 11 (which includes the Beaches-East York and Toronto-Danforth areas) incumbent TCDSB Trustee Angela Kennedy has two challengers registered to run against her. They are Celine DiNova and Lisa Romano Dwyer.

All three local trustees of the Conseil scolaire Viamonde for French-first public education are expected to retain their respective positions. Ward 3’s Amina Bibi Bhaiyat, Ward 2’s Benoit Fortin and Geneviève Oger of Ward 4 are all running unchallenged with a week to go before the deadline to sign up as a candidate. They are the three trustees who are the Toronto representatives on the Ontario-wide board.

The Conseil scolaire catholique MonAvenir Catholic school board for French-first catholic schools in Ontario has no candidates registered to run so far for Ward 4 which overs the entire eastern half of Toronto. The trustee elected for the ward in 2018 is Anne Godbout.