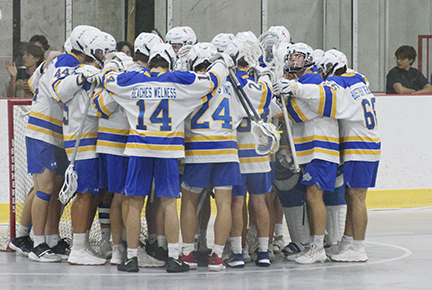 The Junior A lacrosse season is not over for Toronto Beaches even though they fell to the Whitby Warriors in the Ontario Junior Lacrosse League (OJLL) championship series last night.

Playing at home, Whitby clinched the OJLL crown and the Iroquois Cup trophy with an 11-9 win on the night of Wednesday, Aug. 3.

Whitby won the best-of-three championship series in two games. Game One in the series was won 11-7 by Whitby on the night of Aug. 2.

However, there’s still lots of lacrosse to be played by Toronto Beaches as they have qualified for the Minto Cup, the Canadian Junior A lacrosse championship tournament, which will be taking place in Brampton later this month.

Both Toronto and Whitby will be representing the OJLL in the Minto Cup which goes from Aug. 22 to 29 at the CAA Centre in Brampton. This will be Toronto Beaches first ever appearance in the national championships.

The Alberta finals between the St. Albert Miners and the Calgary Mountaineers is still being played. The B.C. champs are also yet to be determined as the final series between the Victoria Shamrocks and the Langley Thunder is still taking place.

For more info on the Minto Cup, please visit https://www.ontariojuniorlacrosse.com/news_article/show/1229434 or go to https://www.themintocup.com/

For more info on Toronto Beaches Junior A lacrosse, visit the Facebook page at https://www.facebook.com/BeachesJrA/