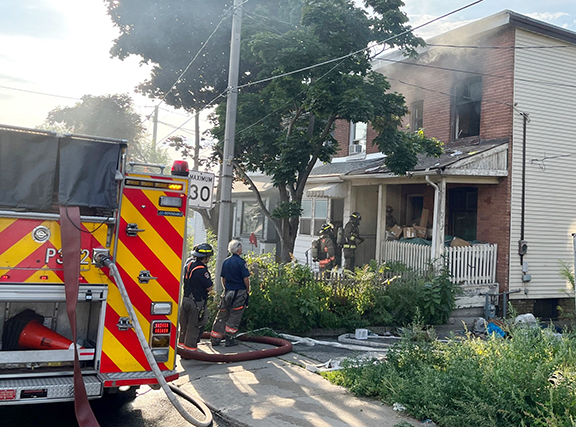 Toronto firefighters monitor the house at 301 Riverdale Ave. on the morning of Wednesday, Aug. 3. Photo by Alan Shackleton.

A man has died after a fire in a semi-detached home in Riverdale early this morning.

Toronto firefighters were called to the home at 301 Riverdale Ave., just east of Pape Avenue, at approximately 12:45 a.m. on Wednesday, Aug. 3.

When firefighters arrived they discovered the body of man in the house. The man was declared deceased at the fire scene. He was the only occupant of the house.

The man’s body was reportedly found on the second floor of the house.

According to CityNews, the home was known by neighbours as a “hoarding situation”.

Fire crews reportedly had to make their way through rooms filled with boxes and other items. A large number of items could be seen in the yard of the house and on the front porch on Wednesday morning as firefighters continued to monitor the scene.

In a tweet earlier this morning, Toronto Fire Chief Matthew Pegg expressed his condolences to the family and friends of the victim. The age and name of the man who died has yet to be released.

“On behalf of Toronto Fire, I extend condolences to family, friends and all those impacted by the fatal fire at 301 Riverdale Avenue,” said Pegg in his Tweet.

He added that the “cause and circumstances” of the fire will be investigated by Toronto Fire in collaboration with the Toronto Police Service and the Ontario Fire Marshal’s Office.