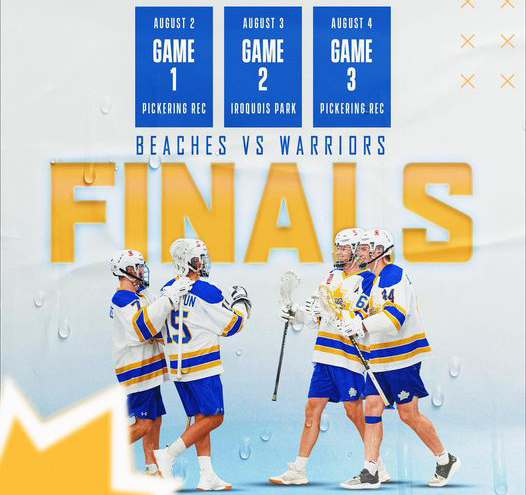 The Toronto Beaches Junior A lacrosse team has qualified for both the Ontario and Canadian championships.

This is the first time Toronto Beaches will compete for the Minto Cup, which is the national junior lacrosse championship trophy.

The only question remaining now is will the local team go into the Minto Cup tourney as the Ontario champs or as the provincial finalists.

Finding the answer to that begins tonight (Tuesday, Aug. 2) as Toronto Beaches and the Whitby Warriors begin their best-of-three Ontario Junior Lacrosse League (OJLL) championship series with the Iroquois Cup presented to the winners.

Toronto Beaches will be playing its home games in this series at the Delaney & O’Brien Arena at Chestnut Hill Developments Recreation Complex in Pickering (more commonly known as the Pickering Recreation Complex). Normally, the Beaches team would play locally at Ted Reeve Arena but repairs to the rink this month mean that is not an option.

Since Toronto Beaches finished second in the OJLL’s regular season, and Whitby was second, the home-arena advantage goes to Toronto.

Game Two is at Iroquois Park in Whitby on Wednesday, Aug. 3, at 8 p.m.

Game Three, if necessary, will be back at the Pickering Recreation Complex on Thursday, Aug. 4, at 8 p.m. Toronto Beaches reached the OJLL championships by beating the Burlington Chiefs three games to two in the best-of-five semifinal series that wrapped up on July 29.

Since the OJLL is hosting the Minto Cup at the CAA Centre in Brampton this year, both teams that reach the league’s playoff championship series will qualify for the national championships.

Other teams competing at the Minto Cup will be the Alberta and British Columbia champions.

The Minto Cup takes place from Aug. 22 to 29 at the CAA Centre in Brampton. For more info on the tourney, please visit https://www.ontariojuniorlacrosse.com/news_article/show/1229434

For more info on Toronto Beaches Junior A lacrosse, visit the Facebook page at https://www.facebook.com/BeachesJrA/