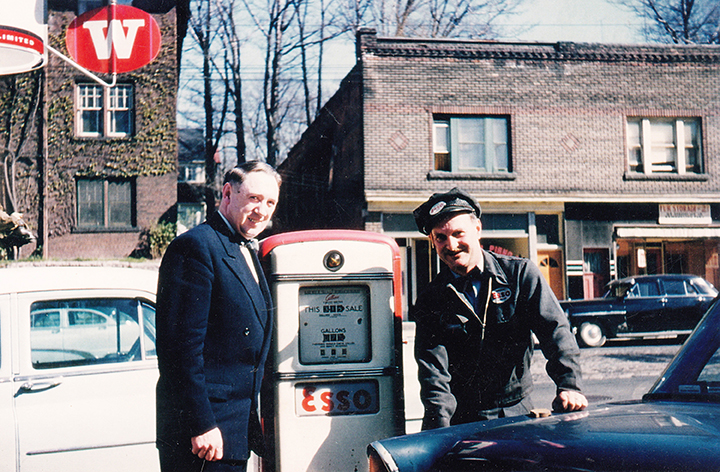 Murray Seymour sent in the above photo of the Esso Station on Queen Street East near Maclean Avenue. Inset image shows the same view today.

Murray Seymour sent me this incredible image along with his text and story. Again, I turn over my pen to our readership. Thank you Mr. Seymour for this time capsule photograph!

If you have an old photograph of the Beach, why not share it with our readers and contact me gdvandyke61@gmail.com

“What a great, great feeling, What a wonderful sense……

“If you recognize these lyrics to this tune then you are probably a Canadian male of the baby boomer vintage whose favourite colours are blue and white.

“Oh, the Leafs failed again to drink from the elusive cup, but when this photo was taken there was a good possibility that Toronto would soon be hosting a Stanley Cup parade up Bay Street.

“ESSO was a proud sponsor for Hockey Night in Canada and commercials featured actor Murray Westgate assuring us that life was good at 37 cents a gallon.

“Mr. Westgate dressed much like this service station attendant at the Esso Station at the south-east corner of Queen Street East and Maclean Avenue. The gentleman in the spiffy blue suit did not need to pump his own gasoline for his Royal Blue 1956 Chevy on this sunny morning. “Mr. Blue Suit was a friend of my parents. This photo was taken from the south side of the street in the service station lot (circa 1960). The buildings on the north
side of Queen still stand in 2022. You will notice diamond shapes in the brickwork.

“Back then as a young boy, I assumed that Murray Westgate was an actual gas jockey for Esso. Not so. He was an accomplished Canadian entertainer. He lived to be 100 years old. I particularly remember him because we have the same first name.

“…of sheer enjoyment and of confidence,
If there’s something you’re aware of, your car’s been taken care of,
At the Esso sign of confidence,
At the happy motoring sign…”