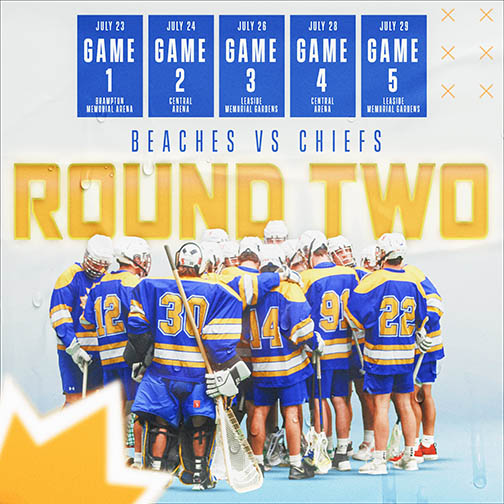 The schedule is out for the Toronto Beaches Ontario Junior Lacrosse League semifinal playoff series against the Burlington Chiefs. Toronto Beaches fans need to note no more games will be played at Ted Reeve Arena due to repairs, and home games will now be at Leaside Memorial Arena.

The Toronto Beaches Junior A Lacrosse Team has won its first-round playoff series over the Peterborough Lakers, and will begin its Ontario Junior Lacrosse League (OJLL) semifinal series tonight (Saturday, July 23) against the Burlington Chiefs.

The match-up with Burlington will be an interesting one as the Chiefs just pulled off a history-making upset of the top-ranked Mimico Mountaineers in their opening round series.

Mimico had finished the OJLL regular season in first place and were the heavy favourites going into the series against Burlington, who had finished in eighth place to secure the final playoff spot in the 11-team league.

Yet, Burlington not only upset Mimico to win the series, the Chiefs swept it in three straight to mark the first time the bottom seed had ever swept the first-place team in the OJLL playoffs.

Other first round series in this year’s OJLL playoffs saw the third-place Whitby Warriors sweep the sixth-place St. Catharines Athletics; while the Orangeville Northmen beat the Oakville Buzz in five games.

The ultimate prize in the OJLL playoffs is to win all three rounds, be declared champion and Iroquois Trophy winner. The OJLL playoff champ earns a trip to the Minto Cup, awarded to the top Junior A lacrosse team in Canada.

And since the OJLL is hosting the Minto Cup at the CAA Centre in Brampton this year, both teams that reach the league’s playoff championship series will qualify for the national championships.

Which means if Toronto Beaches beats Burlington in this semifinal series, they will appear in the club’s first-ever Minto Cup championship tourney.

This season has already been a history-making one for Toronto Beaches as they finished with a record of 15 wins and five losses. The 15 wins were the most a Toronto Beaches team has ever notched in the OJLL’s regular season.

The best-of-five series against Burlington begins tonight at 7 p.m. at Brampton Memorial Arena. Game Two is on Sunday, July 24, at 7 p.m. at Central Arena in Burlington.

Game Three of the series goes at Leaside Memorial on Tuesday, July 26, at 8 p.m.

If necessary, Game Four is in Burlington at Central Arena on July 28 at 8 p.m.; and Game Five is slated for Leaside Memorial on July 29 at 8 p.m..

For updates on the Toronto Beaches upcoming playoff series against the Burlington Chiefs, please go to https://www.facebook.com/BeachesJrA/

UPDATE: Games that were scheduled to take place at Leaside Memorial Arena have now been moved to Pickering. Toronto Beaches Junior Lacrosse Team announced on July 25 that the remainder of its postseason “home” games will be played at at the Delaney & O’Brien Arena, 1867 Valley Farm Rd., Pickering. See our story on the change in venue: https://beachmetro.com/2022/07/25/toronto-beaches-jr-a-lacrosse-team-to-play-remainder-of-home-playoff-games-in-pickering/