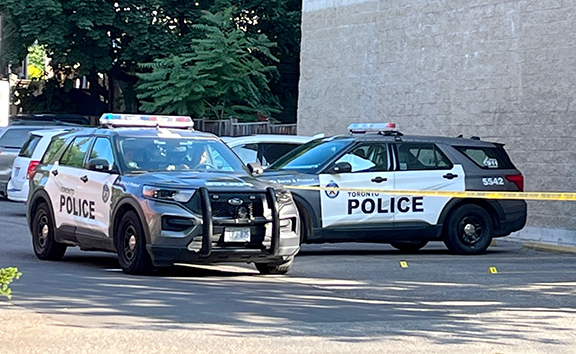 Toronto police investigate near Gerrard Street East and Woodbine Avenue after a 32-year-old woman was fatally shot in the area on the night of July 7.

Two suspects are being sought in connection with the murder of a woman in the Gerrard Street East and Woodbine Avenue area last week.

Toronto police said a man and a woman are wanted after Megan Elizabeth Crant, 32, was shot and killed in the rear parking lot of a building at 1910 Gerrard St. E., which is just west of Woodbine Avenue, on the night of Thursday, July 7.

Police have issued an arrest warrant for Nicholas Hirsch, 25, of Toronto, on a charge of first degree murder.

Police have also issued an arrest warrant for Chelsey, Mais, 29, of Toronto, on a charge of accessory after the fact to murder.

Police said both should be considered armed and dangerous. If spotted, call 9-1-1 and do not approach them, police said.