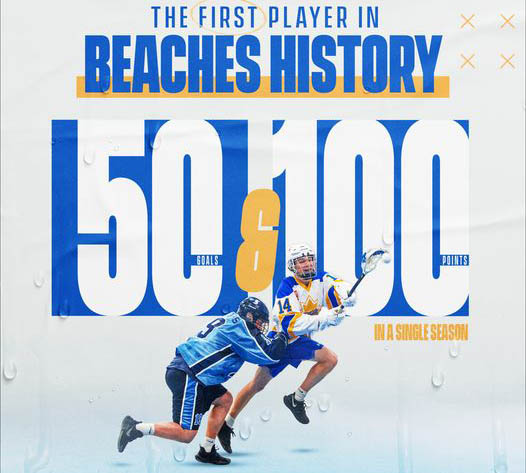 With a hat trick on Wednesday night, Willem Firth became the first player in Toronto Beaches Junior A lacrosse history to rack up 50 goals and 100 points in a regular season.

The Toronto Beaches Junior A Lacrosse team wraps up its regular season with a road game tonight (Friday, July 8) against Kitchener-Waterloo.

Tonight’s game is the back end of a home-and-home with Kitchener-Waterloo. Toronto Beaches won the first game 15-3 on Wednesday, July 6, at Ted Reeve Arena.

Wednesday’s win was Toronto Beaches 14th of the season, against five losses. It was also Toronto-Beaches fourth win a row in Ontario Junior Lacrosse League action.

The July 6 game was also one for the record books as forward Willem Firth became the first player in Toronto Beaches Junior A lacrosse history to rack up 50 goals and 100 points in a regular season. Firth notched a hat trick in the July 6 win over Kitchener-Waterloo.

For more on Toronto Beaches Junior A Lacrosse, including scores and information on the upcoming OJLL playoffs, please go to www.beachesjralacrosse.com/page/show/7135289-schedule