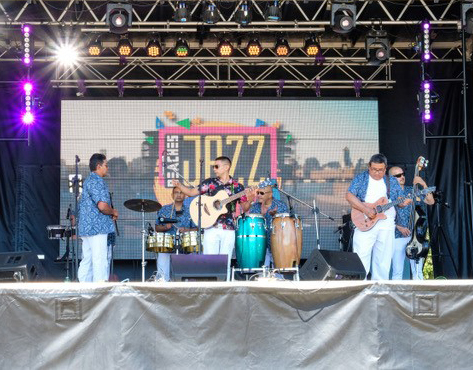 The Los Hijos De Tuta Band performed at Woodbine Park last weekend as part of the Beaches International Jazz Festival's Salsa on the Beach concerts. This weekend (July 8 to 10) will see the Sounds of Leslieville and Riverside celebration as part of the festival. Photo by Donna Braybrook.

The 34th Beaches International Jazz Festival begins its second weekend with the Sounds of Leslieville and Riverside tonight.

Taking place from the night of Friday, July 8, through the weekend of July 9 and 10, the Sounds of Leslieville and Riverside features live performances at a number of locations over the next three days.

The Sounds event will consist of our four sections, including the Riverside Common Stage (657 Queen St. E.); the Main Stage at Jimmie Simpson Park (870 Queen St. E.); and the Big Band Stage at Leslie Grove Park (1158 Queen St. E.). There will also be The Richards Group Queen Street East Block Party with performances at a number of locations.

The Riverside Common Stage will be open July 8 and 9 from 7 to 11 p.m. with performances by the Jerome Tucker Band and Reggaddiction.

The Main Stage at Jimmie Simpson Park sees performances slated for July 8, 9 and 10.

The Big Band Stage at Leslie Grove Park has performances slated for July 9 and 10.

The fun gets underway at noon on July 9 at Leslie Grove with Swing Dance lessons with Swing Toronto. After that, there will be performances by Martin Loomer’s Orange Devils at 1 p.m.; The Advocates Big Band at 3:30 p.m.; and the Swing Shift Big Band at 5 p.m.

The Sunday, July 10, lineup at Leslie Grove Park also begins at noon with the dance lessons followed by The Composers Collective Big Band Collective at 1 p.m.; and The Jazz Mechanics at 3:45 p.m.

For more information on the Sounds of Leslieville and Riverside specifically, please go to https://www.beachesjazz.com/sounds-of-leslieville-riverside

For more information on the Beaches International Jazz Festival, which takes place throughout the month of July, please see our earlier story at https://beachmetro.com/2022/06/30/beaches-international-jazz-festival-is-back-with-live-concerts-and-streetfest-celebration-on-queen-street-east-this-july/