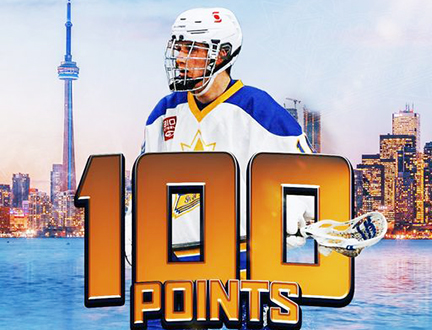 With five points in the Toronto Beaches win over Six Nations Arrows on July 3, forward Willem Firth became just the fourth player in team history to surpass the 100-point mark in a season.

Three wins in a row at home and looking for their fourth, the Toronto Beaches Junior A Lacrosse team plays host to Kitchener-Waterloo tonight at Ted Reeve Arena.

Tonight’s tilt is the final home game of the regular season for Toronto Beaches.

The local team had an impressive home stand over the Canada Day long weekend, racking up wins over the Brampton Excelsiors on June 30; the Oakville Buzz on July 1; and the Six Nations Arrows on July 3.

In the 11-8 win over Six Nations, Beaches forward Willem Firth notched five points and became just the fourth player in team history to surpass the 100-point mark in a season.

Heading into tonight’s game, Toronto Beaches has a record of 13 wins and five losses in Ontario Junior Lacrosse League action and are tied for first place with the Mimico Mountaineers.

Toronto Beaches wraps up the regular season with a road game in Kitchener-Waterloo on July 8.

For more on Toronto Beaches Junior A Lacrosse, including scores and playoff information, please go to www.beachesjralacrosse.com/page/show/7135289-schedule