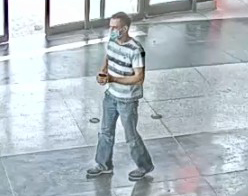 Police are asking for the public's help identifying this man in connection with an alleged assault outside the Victoria Park Subway Station on the afternoon of June 27.

Toronto police are seeking the public’s help in identifying a suspect in connection with an alleged assault at the Victoria Park Subway Station late last month.

According to police, a 49-year-old man was smoking outside the station (located on Victoria Park Avenue just north of Danforth Avenue) at approximately 3:35 p.m. on Monday, June 27, when he became involved in a verbal altercation with another man.

Police alleged the 49-year-old man was then assaulted by the other man. The victim was taken to hospital to be treated for serious injuries, but has since been released.

The suspect is described as medium build with dark wavy hair. He was wearing a blue and white horizontal striped shirt, blue jeans, grey runners with white soles and was carrying a cellphone with headphones.