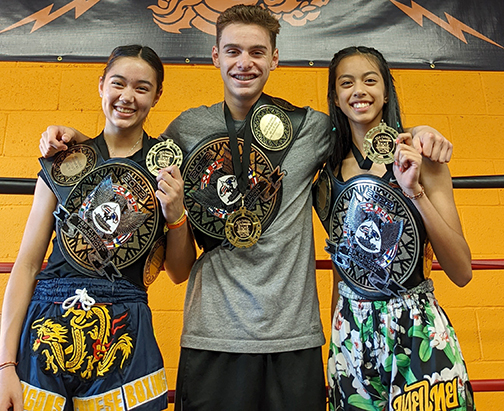 The sport of Muay Thai is Thai kickboxing.

She is one of only eight Muay Thai athletes from Canada invited to attend the youth world championships this August in Kuala Lumpur, Malaysia.

Also invited to take part in the youth world championships is her Stride teammate Caelyn Sunga-Bartac.

The IFMA Youth World Championships is an annual competition where countries from around the world compete in Muay Thai. Its history goes back as far as 1993 and 2005 for the Youth Championship. Until recently, this was one of the highest levels of competition for the sport of Muay Thai.

However, in July of 2021 Muay Thai was certified as an Olympic sport and IFMA was granted permanent membership in the International Olympic Committee.

The cost for Birch to compete at the youth world championships in Malaysia is high, and her family and supporters have started a GoFundMe page to help with fundraising for both Nico and Caelyn to attend.

The GoFundMe page can be accessed at https://www.gofundme.com/f/nico-caelyn-ifma-2022

“It is our ultimate hope that Nico’s hard work will serve as inspiration to other young people, especially young racialized women and girls, to discover their passion and pursue it to their fullest potential,” said her mother Heidi in a note to Beach Metro Community News.

Continuing her strong performances in Muay Thai, Birch recently won the championship belt in her weight and class at the Thai Boxing Association Muay Thai Expo World Championships in Des Moines, Iowa on June 26. At the same event, her teammates Caelyn (who is a Grade 10 student at Markham’s St. Brother Andre Catholic High School) and Owen Giraldo (a Grade 10 student at Neil McNeil Catholic High School in Scarborough) also put in strong performances.

Along with being in the academic IB program at Monarch Park, Birch has also been named the president of the school’s student council for what will be her Grade 12 year starting in September.