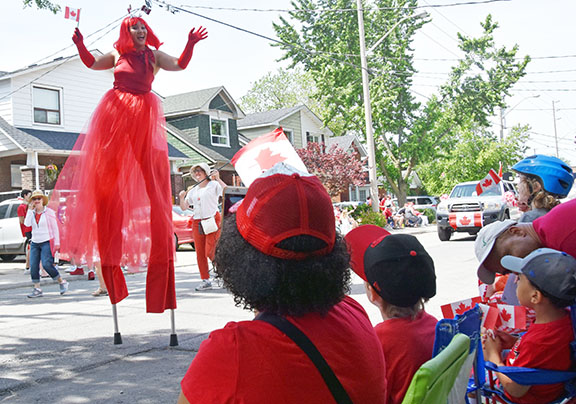 Spectators take in the 2019 East York Canada Day Parade. The 65th annual version of the parade starts at Dieppe Park at 10:30 a.m. on July 1 and heads east to Stan Wadlow Park.

There will be lots of ways for East Toronto residents to celebrate Canada Day on this Friday, July 1.

Fireworks displays, festivals and a parade are on tap to help mark Canada’s 155th birthday.

The parade goes from Dieppe Park to Stan Wadlow Park (373 Cedarvale Ave.). The parade is expected to end at noon. Some 25 community groups will take part in the parade either marching, walking, cycling or riding.

Participants will parade east on Cosburn Avenue from Dieppe Park to Woodbine Avenue where they will turn north to Trenton Avenue, heading east for the final leg into Stan Wadlow Park.

The festival features fun activities, games, a kids midway, food and entertainment. There will also be a craft beer market.

Slated to perform at the Canada Day festival in Stan Wadlow Park are bands such as The East York Blues Allstars, a magic show by Edward Swirsky, Trainwreck, Jeff Scott and The Rave Ons and Sugar Daddies. There will also be the popular East York’s Got Talent event taking place on Canada Day. Emcee for the festival is Mr. Eddie Barnette.

The East York Canada Day Festival is run by a group of dedicated volunteers with the support of the Government of Canada, The City of Toronto, the East York Foundation and Muddy York Brewery.

For more info on the July 1 events in East York, please visit the website at www.EYDC.ca

Large crowds are expected to attend the display, which can be viewed from anywhere along the Boardwalk.

Toronto police are reminding those planning on attending that the use of fireworks on public properties including beaches, parks, parkettes, and sports fields is illegal.

Due to the large crowds and localized road closures, police are urging people to find alternate methods other than driving to get to the Beach on the night of July 1.

“Drivers can expect traffic delays due to road closures in the area, including Lakeshore Boulevard East. Parking enforcement will be heightened in the area due to limited parking. Motorists are advised to avoid the area and to use alternate modes of transportation,” police said

The following TTC bus routes serve Woodbine Beach Park and Ashbridges Bay Park: 22A Coxwell and 92A Woodbine. The TTC plans on adding extra buses to those routes on July 1.

Also in the Beach on July 1 will be the annual Q107 Canada Day Picnic at Woodbine Park. The picnic goes from noon to dusk at the park, located at 1695 Queen St. E. – northeast of Lake Shore Boulevard East and Coxwell Avenue.

Tribute bands slated to perform include Grace, 2 ( tribute to The Tragically Hip); We Ain’t Pretty (tribute to Tom Petty); Keep The Faith (tribute to Bon Jovi); and Just Journey.

The Royal Canadian Legion Branch 11 on Dawes Road is inviting residents to a Canada Day celebration on Friday, July 1.

The Canada Day party goes from noon until 7 p.m. on the Legion grounds and will feature live musical entertainment, a bouncy castle, kids games, refreshments and a barbecue.

Each person will receive one free hamburger or hot dog and one piece of birthday cake.