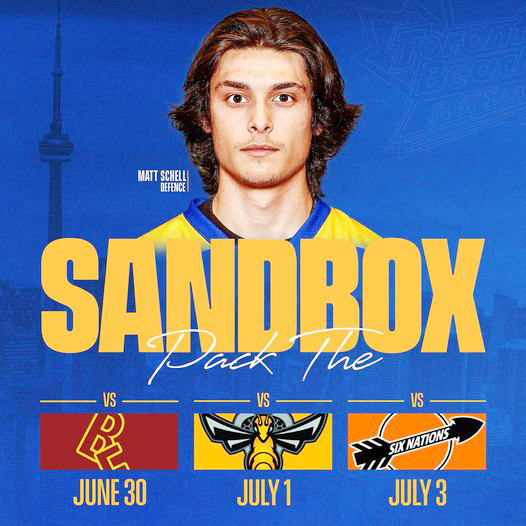 Defender Matt Schell and the rest of the Toronto Beaches Junior A Lacrosse team welcome the Brampton Excelsiors to Ted Reeve Arena on the night of Thursday, June 30.

The Toronto Beaches Junior A Lacrosse team’s are preparing for four upcoming home games in a row.

The local lacrosse action continues on Canada Day, July 1, as Toronto Beaches welcomes the Oakville Buzz to Ted Reeve Arena with a game slated to start at 8 p.m.

The lengthy homestand ends with a Wednesday, July 6 home game at Ted Reeve Arena against Kitchener-Waterloo. That game also starts at 8 p.m.

Toronto Beaches will then wrap up the regular season in the Ontario Junior Lacrosse League with a road game in Kitchener-Waterloo.

As of June 26, Toronto Beaches had a record of 10 wins and five losses.

For more on Toronto Beaches Junior A Lacrosse, including scores and playoff information, please go to www.beachesjralacrosse.com/page/show/7135289-schedule