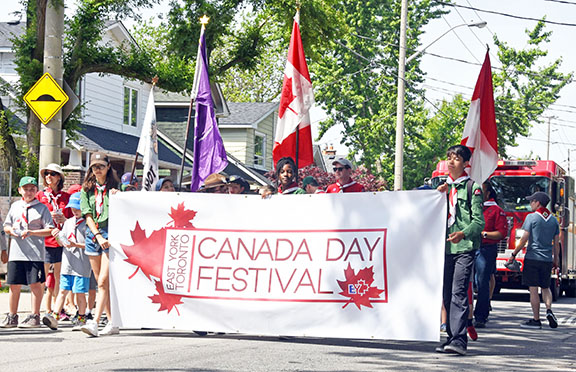 Participants take part in the East York Canada Day parade in 2019, the last time it took place due to the COVID-19 pandemic. This year's parade begins at Dieppe Park at 10:30 a.m. on July 1 and will then head east to Stan Wadlow Park where there will be a community festival during the day and fireworks at night.

The East York Canada Day celebrations on Friday, July 1, will include a parade, community festival and fireworks display.

This Friday’s celebrations will be the 65th annual version of the event in East York. Due to the COVID-19 pandemic, the last two years saw virtual and muted versions of Canada Day in East York.

For this year, though, all the traditional pieces of the East York celebration are back in place.

As usual, the day is kicked off by the East York Canada Day Community Parade which begins at 10;30 a.m. on Friday, July 1, at Dieppe Park (145 Cosburn Ave.).

The parade goes from Dieppe Park to Stan Wadlow Park (373 Cedarvale Ave.). The parade is expected to end at noon.

Some 25 community groups will take part in the parade either marching, walking, cycling or riding.

Participants will parade east on Cosburn Avenue from Dieppe Park to Woodbine Avenue where they will turn north to Trenton Avenue, heading east for the final leg into Stan Wadlow Park.

The festival features fun activities, games, a kids midway, food and entertainment. There will also be a craft beer market.

Slated to perform at the Canada Day festival in Stan Wadlow Park are bands such as The East York Blues Allstars, a magic show by Edward Swirsky, Trainwreck, Jeff Scott and The Rave Ons and Sugar Daddies. There will also be the popular East York’s Got Talent event taking place on Canada Day. Emcee for the festival is Mr. Eddie Barnette.

The East York Canada Day Festival is run by a group of dedicated volunteers with the support of the Government of Canada, The City of Toronto, the East York Foundation and Muddy York Brewery.

For more info on the July 1 events in East York, please visit the website at www.EYDC.ca