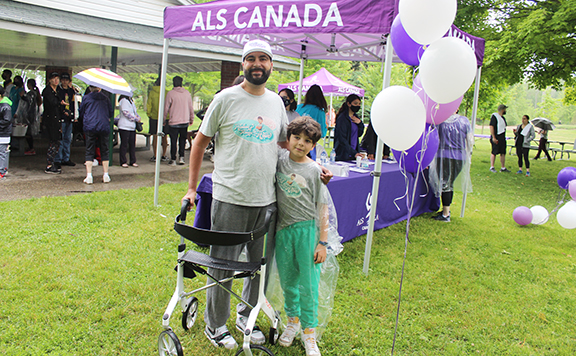 Matthew Rona and his son Hudson, 9, prior to the start of the Walk to End ALS at Woodbine Beach on Sunday, June 12. Photo by Alan Shackleton.

As the Walk to End ALS prepared to get started on a rainy Sunday morning on Ashbridges Bay, Matthew Rona and his son Hudson took time to reflect on how important the walk was to their family.

Matthew has ALS and is now learning to live with the diagnosis that he received in January of this year and what it means for both himself and his family’s future.

ALS ((Amyotrophic lateral sclerosis) is a currently terminal illness that paralyzes people because their brain is no longer able to communicate with the muscles in the body.

“When you hear something is 100 per cent fatal, you have to shift what life looks like,” said Matthew prior to the start of the walk.

“I try to live in the moment as much as possible. My great wife does a lot of the thinking for the future. I don’t know what I would do without her,” he said.

“I have great friends and I have to focus on what’s doable.”

Part of what is doable was raising funds for the Walk to End ALS and taking part in this year’s version of it on June 12 along the Boardwalk in the Beach.

Matthew and Hudson teamed up to raise more than $30,000 for this year’s walk.

The Rona family lives in the Greenwood and Danforth avenues area, and Matthew said the support of friends and family has been vitally important since he was diagnosed with ALS.

“An event and fundraiser like this changes people’s lives,” said Matthew of the Walk to End ALS. “The equipment that helps me stay positive, and the support shown by friends and family.”

The walk raises money to purchase the equipment and people to help those with ALS live their lives at home, and it also raises awareness about the disease.

Matthew said there is a lot more that can be done to help people learn more about ALS and to raise the awareness of it across the country.

According to the ALS Society of Canada, more than 3,000 Canadians live with ALS, and more than 1,000 are diagnosed with it each year. The Society empowers people with ALS and their families to navigate the realities of the disease and to provide support for them.

Matthew said that support means and lot to him and his family.

“It’s helpful to be around people who understand what’s going on. We have a different camaraderie with them,” he said.

Matthew is at a place with his ALS where he can communicate and move around with the aid of a walker. Hudson said he loves being able to spend time with his dad.

“He’s still here and still my father but he just has a disability…We play a lot of video games and that’s one of the things he can do.”

For more information on the ALS Society of Canada, please go to https://als.ca/