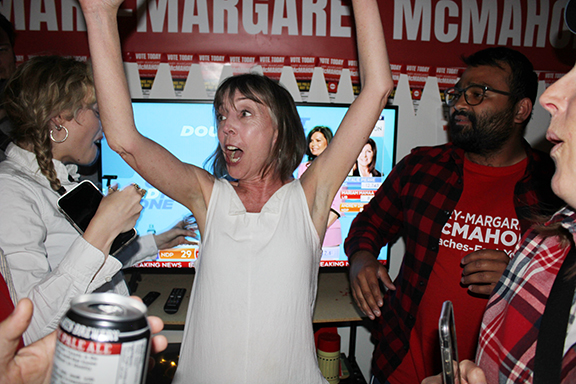 Mary-Margaret McMahon celebrates her victory for the Liberals in the riding of Beaches-East York in the June 2 provincial election. Inset photo: NDP candidate Kate Dupuis, who finished a close second, watches the results on election night. Photos by Josh Sherman.

Minutes after Ontario Liberal Party candidate Mary-Margaret McMahon found out that she’d won the Beaches-East York riding on Thursday night, she said she was “melancholy.”

That’s because although she earned 35.4 per cent of the vote — edging out New Democratic Party candidate Kate Dupuis’s 33.2 per cent — the party that McMahon will represent at Queen’s Park was handed another crushing election defeat on June 2.

“That’s really disappointing,” said McMahon standing behind her campaign office on the Danforth, near Woodbine Avenue. “Happy to win my seat, got a hell of a lot to work to do — and we’ll figure that out,” she added.

Doug Ford’s Progressive Conservatives won another majority, and Steven Del Duca stepped down as Liberal leader after failing to win the riding of Vaughan-Woodbridge.

McMahon, who previously represented the former municipal Ward 32 Beaches-East York as a city councillor for two terms from 2010 to 2018, said that the “climate emergency” drew her back to politics. “I can’t look my kids in the eye without knowing that I‘ve given everything I’ve got to put the [environmental policies in place.”

Just a few doors from McMahon’s campaign office, Dupuis walked into Local 1794 to a hero’s welcome, as more than 50 supporters gathered in the pub chanted her name and cheered. “I’m so proud of the work that we did,” Dupuis told Beach Metro Community News at the event. “We were so incredibly close here… that is shocking to me, as someone brand new, who’s up against a two-term city councillor, I think that shows us just what an incredible race we ran here.”

In fact, the result was so close that Dupuis, who only decided to run in March, wants to do it again. “We have four more years to plan, to organize, and to regroup and we are going to keep pushing,”

Progressive Conservative Party candidate Angela Kennedy, a long-time local Toronto Catholic District School Board trustee, garnered 18.5 per cent of the vote and was disappointed in the results.

“I feel very close to the people in Beaches-East York, and I really felt that I had an opportunity here… but wasn’t meant to be,” she said.

She added that if her “health holds up and there’s an opportunity,” she’d run again. For now, though, she’s focused on her trustee work with graduations approaching and, after that, a different election this fall. “I guess I’ll be running in the municipal election,” she said in a telephone interview.

The riding’s results weren’t a shock to Abhijeet Manay, candidate for the Green Party of Ontario. “It’s not that surprising that Mary-Margaret [McMahon] won, given her name recognition,” he said in a telephone interview.

However, he said he was proud of his team for more than doubling the number of votes the Greens scored this time around. (In 2018, Green candidate Debra Scott scored 4.6 per cent of the vote, compared to Manay’s 10.2 per cent.)

“I’m 32 years old, and I live in the Upper Beaches and I’m going to run here until I win.”