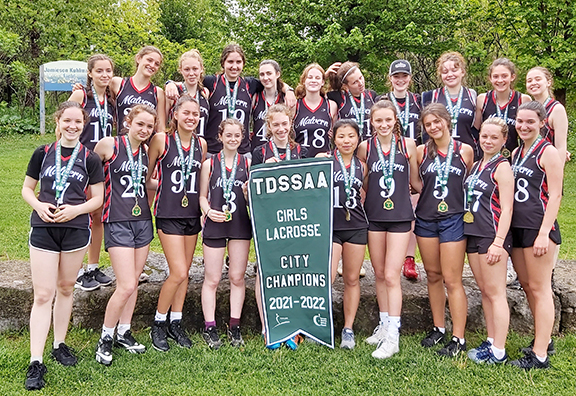 Members of the Malvern Collegiate girls' lacrosse team celebrate their city championship on May 27 at the Cherry Beach Sports Fields. Photo: Submitted.

The Black Knights won the Toronto District Secondary School Athletic Association (TDSSAA) championship with a 10-4 win over Birchmount Park Collegiate Institute in the title game played at the Cherry Beach Sports Fields on Friday, May 27.

The city crown wrapped up a perfect season for the girls’ lacrosse team as they finished with 10 wins and 0 losses. Before meeting Birchmount in the final, the Black Knights beat East York Collegiate in the city semifinals.

Assistant coach Glen McKelvey said the Malvern girls put in an excellent showing at the Trillium Cup on June 1 and 2.

Heading into the OFSAA championships, the Black Knights were ranked sixth in the province but finished the tourney fifth overall.

“Their only loss all season was to the team that won the gold medal. So super proud of what they accomplished,” said McKelvey in a note to Beach Metro Community News.