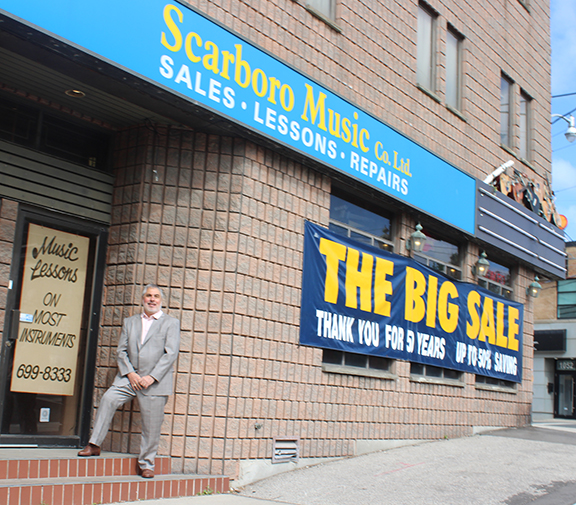 Frank Natale stands in front of his landmark Scarboro Music store on the corner of Victoria Park Avenue and Kingston Road. Natale is retiring after 50 years of running Scarboro Music in the neighbourhood. Photo by Alan Shackleton.

After five decades of being the “go to” music store in the Beach, Scarboro Music’s Frank Natale is retiring.

The store is a landmark location at the southwest corner of Kingston Road and Victoria Park Avenue, and has served the needs of musicians and aspiring musicians since Natale, 75, first set up shop in the neighbourhood in 1972.

He bought the Scarboro Music House at 1043 Kingston Rd., a couple of doors west of where the current store is now located, in 1972 and operated the business there until starting construction on the new building in 1979.

“It was a vacant lot at that corner,” remembered Natale.

He also remembered how complicated it was to get approvals for the building, which also included his residence above the store, as it was in the days of Metro Toronto so he needed approvals from both Toronto and Scarborough councils before being able to go ahead as it was on the border of the two municipalities.

Natale said the result, though, was a “great” building that is a landmark and represents for many the crossing of what was once the old boundary between Scarborough and Toronto.

An accordionist, Natale also taught piano and organ to a generation of young musicians in the neighbourhood.

He said an appreciation of music, and learning how to play it, is important for young people.

“It develops a different skill level and while they may be taking music lessons they are also learning how to pay attention. It makes you focus and really concentrate on what you are doing,” said Natale.

That’s a skill that will serve a young person well throughout their life, he said, whether they become a dedicated musician or not. “They get a head start a young age to learn discipline and control.”

Natale has been teaching music since the age of 16. He started doing so while working at Mundinger Music in the 1960s. The store was located downtown in the area where the Eaton’s Centre now is. However, when the store decided to move further west and north, Natale wondered if he should start his own music store and also offer lessons.

He found out that the Scarboro Music House on Kingston Road was for sale, and he closed the deal in 1972.

“The owner was getting ready to retire and I was interested, so I made him an offer,” said Natale.

“It was spelled that way when I first bought the store and felt why change it,” he said.

Over the past 50 years, Natale said the support for Scarboro Music from the community has been fantastic.

“I can’t thank the community enough for their support during the last 50 years. Certainly 90 per cent of our retail and studio business was done with the community and I’ve been blessed to have built a business around my passion.”

Now that he is retiring, Natale said he intends to spend more time at his cottage in the Kawarthas.

Scarboro Music, and its dedicated staff of music professionals and teachers, will continue operating.

Among those who made and continue to make Scarboro Music a special place are music teacher Ivan Zilman and studio manager Josh Dieleman.

Zilman has been with Scarboro Music since 1982. An accomplished musician himself, many of Zilman’s students became professional musicians. During his tenure he often taught the children of his former students. Zilman will also continue his love of teaching music at The Beaches Conservatory in nearby Henley Gardens.

For more information on Scarboro Music, please visit the website at www.scarboromusic.com