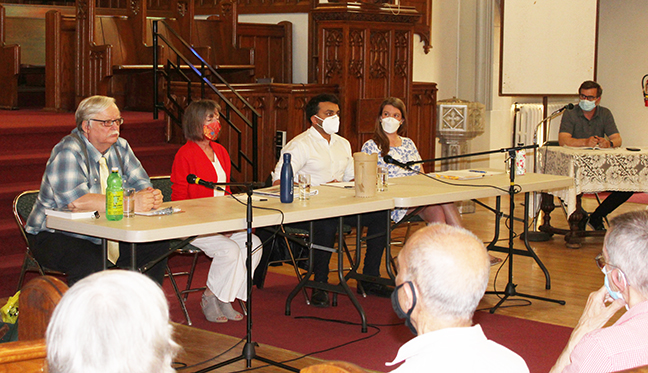 A Beaches-East York candidates meeting presented by the Balmy Beach Residents Association, Community Centre 55 and Beach Metro Community News toook place at Kingston Road United Church Monday, May 30. In photo are (from left) Stephen Roney, of the New Blue Party; Mary-Margaret McMahon, of the Liberal Party; Abhijeet Manay, of the Green Party; and Kate Dupuis, of the NDP. Moderator (at far right) for the meeting was Alan Carter of Global News. Photo by Alan Shackleton.

In one of their last opportunities before the provincial election on June 2, a number of candidates for Beaches-East York had a chance to convince voters how they will tackle key issues, such as affordability, if elected.

The meeting featured Kate Dupuis of the NDP, Mary-Margaret McMahon of the Liberal Party, Abhijeet Manay of the Green Party and Stephen Roney of the New Blue Party. The candidate for the Progressive Conservative Party, Angela Kennedy, declined the invitation to attend.

A top issue for voters, and the first question from Carter, was the lack of affordability in Ontario, from housing to rising gas and food prices.

First up to respond was New Blue Party candidate Roney.

“We have to work on supply and the way to do that is deregulation,” he said. “Zoning has been a nightmare throughout its history. That’s why we have these spaghetti roads and these sprawling suburbs eating up green space. This is why you get the Stalinist sameness in Eastern Europe, where every building looks the same as the next building for miles. If we cut away red tape, then the builders, public or private, can build what the people need, what the market needs.”

Roney said he is also against rent control and tax breaks as these measures only increase demand while not addressing supply.

McMahon leaned on her previous work as Beaches-East York Councillor from 2010 to 2018, where she said she spearheaded policies such as laneway suites, to highlight the Liberal Party’s platform.

“We are planning to double the pace of home loan building in the next 10 years to 1.5 million homes and create an Ontario housing homebuilding corporation,” said McMahon. “We’re also proposing 138,000 new deeply affordable homes.”

McMahon’s platform also includes taxing vacant homes, noting a four bedroom home that has been vacant in her neighbourhood for 30 years. “That shouldn’t happen when we’re in a housing crisis,” she said.

Manay, of the Green Party, pointed to how much more difficult buying a home is for younger adults.

“I’m 32 years old and my generation and those younger than me can’t even think about owning our own homes,” said Manay. “It takes about $200,000 for just the down payment, which takes about 22 years on an average salary to save up.”

Manay proposed a “bold plan” that included increasing the housing supply with existing stock, ending speculation, as well as a vacancy tax and a multiple homebuyer tax starting at 20 per cent and a progressively higher tax for each additional home.

“We also need innovative solutions to back that up to increase supply including duplexes, laneway housing, tiny homes, which can build supply within the existing stock without harming the Greenbelt,” he said.

Dupuis, of the NDP, who purchased her home in 2009, lamented how she would have no chance to live in her neighbourhood given today’s prices. Her platform includes building more affordable homes as well as balancing the maintaining of current homeowners’ investment with support for first-time home buyers and seniors.

“The vast majority of Ontarians want to remain in place and age with dignity at home,” said Dupuis “In terms of protecting not only the investment of homeowners, but the quality of life of homeowners here in Beaches-East York, we need to make sure that folks are able to be supported to remain where they want.”

Seniors remaining in their homes means less supply which the NDP have taken into account, she said. ”We also need to support young people who may not have hundreds of thousands of dollars and they may not have intergenerational wealth access.” said Dupuis. “The NDP would actually support first time homebuyers to access a shared home equity loan up to 10 per cent of their home that they could then pay back over the course of the homeownership or when they move.”

Affordability in Ontario isn’t limited to homes as evidenced by the current prices of gas.

“Other places in Canada have regulations on gas prices,” said Dupuis. “I come from Quebec, that’s one of them. Newfoundland, PEI, there are a number of places here in Canada where we’re able to do this. It seems strange in Ontario, we seem to have this bizarre difficulty. We also want to make sure that the Ontario Energy Board monitors the price of gas across Ontario and advises on policies to reduce price volatility.”

Dupuis and the NDP want to move away from gas powered vehicles and hope to have zero emission vehicles made in Ontario by 2035 that includes rebates for those willing to trade in their “gas guzzlers”.

McMahon also supports lowering the gas tax but warned that it needs to be balanced with the current climate emergency.

“We need to look at all modes of transportation,” said McMahon. ”We need to reverse the Ford Conservatives selling off of our railways. We need to invest in regional rail, like we used to have, so that someone doesn’t have to drive from Guelph or London into Toronto, and make it easier by providing people with affordable, reliable options.”

McMahon proposed a $9,500 rebate as well as a dollar for a transit ride to encourage a return to public transit that has been running under 50 per cent capacity due to COVID-19.

Neither Manay or Roney believe lowering the gas tax is the solution.

“Lowering the gas tax is essentially a fossil fuel subsidy,” said Manay. “Look where we are today. It’s May and there’s a heatwave that’s going through the entire province. That is not normal. What we actually need to focus on is exactly a complete transition to electric vehicles and funding our transit system adequately.”

Manay’s platform also included a $10,000 rebate to ease the transition and the building of charging stations across Ontario.

Roney agreed with Many about the gas tax, but he had a different focus.

“But we don’t want to subsidize gasoline specifically for environmental reasons. We had a problem with the supply chain across the board. We have a problem with labour because everything has been locked down and shut down. We’ve got to end the lockdown and shutdowns and the problem should correct itself, although not immediately, if we can just do that. We’ve got to end all of the mandates. They’ve reduced the labour force, they killed our supply chain and forced prices up,” he said.

The price for homes and goods weren’t the only topics discussed on Monday night.

Electoral reform, additional care for seniors that have been devastated by the pandemic were also discussed.

To wrap up the evening, the candidates were asked by Carter about the divisive relationship between the political parties, and Ontarians, and how they would “lower the partisan temperature”.

“Critical theory is largely responsible for that partisanship,” said Roney. “It’s trying to split us into tribes, and warring tribes, we should all be Ontarians together. There’s the story of the Good Samaritan, your neighbour, your community and other good people. And it doesn’t matter whether they are Samaritans, or Jews or Gentiles, or what colour their skin is for heaven’s sake, we’ve got to get past that, and love one another and help one another again, we’ve lost that.”

McMahon would be willing to work with any of the parties provided they came up with a good idea.

“So my track record, in everything I’ve done, is just getting things done,” said McMahon. “Working across party lines, working with everyone. I don’t care where the good ideas come from, as long as they come and let’s make them happen. I also believe in positive politics. I’m an eternal optimist. And, you know, people need to see that people want to have hope. There’s a lot of despair out there. So they want elected officials whom they can trust and who believe in positivity to work well with others. I have spent my life fighting for our community, and our planet.”

For Manay, proportional representation is the answer.

“The kettle pot that is bubbling right now is because people don’t feel represented. They don’t feel like their voice matters. They don’t feel like their voice is being heard in the halls of power of this country in this province. As your Ontario Greens MPP for Beaches-East York, I would absolutely support proportional representation and introduce legislation, and work with all parties to be able to bring that forward here in Ontario.”

Dupuis pointed to her previous collaboration with the provincial government regarding childcare.

“I know I can work well and connect with others,” said Dupuis. “I also know that Doug Ford really likes my ideas because during COVID-19 I gave him a lot of great ideas, working together with NDP MPs. We successfully pushed him to prioritize childcare workers for vaccination access, we successfully pushed him to reopen playgrounds when he closed playgrounds last spring. And most importantly, we successfully encouraged him to finally release the massive stockpile of rapid tests that the federal government had purchased for all Ontarians with our taxes.  So when we talk about working well at Queen’s Park, I already know that Doug Ford and his MPPs liked my ideas, and I would have no problem helping them.”

The Ontario election will take place on June 2. For more information on where and how to vote, please visit Elections Ontario.

The full candidates’ meeting for Beaches-East York that took place on May 30 can also be viewed on the Balmy Beach Residents Associaiton You Tube channel at https://www.youtube.com/channel/UCk1hCpGCpjnBcWIm6ttOm3A