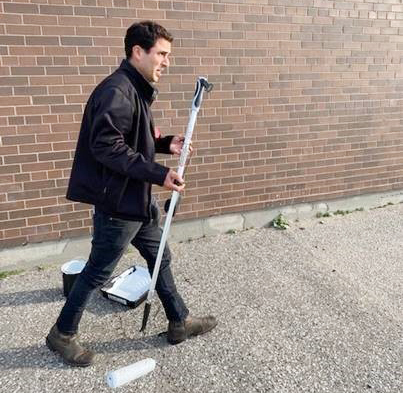 Police are looking to identify this man in connection with an investigation into the painting over of a wall mural in the Beach. Inset photo shows the line of paint on the mural of the south wall of the Balmy Beach Club by the Boardwalk.

Police are seeking the public’s assistance in identifying a man wanted in connection with vandalism to the mural on the wall of the Balmy Beach Club facing the Boardwalk last week.

The man is being sought on a charge of public mischief.

On Thursday, May 26, police received a call for damage regarding the mural at the club, which is located at the foot of Beech Avenue south of Queen Street East. According to police, a man posted unwanted notices around the building and then painted a long white line along the middle of the mural.

According to the club’s newsletter, the incident took place at approximately 7:30 a.m. A club member noticed what the man was doing and encouraged him to leave the area.

The man is described as in his 30s, with dark hair, and was wearing a black jacket and jeans.

An image of the suspect has been released by police.

UPDATE: Police have identified the man wanted in connection with this alleged incident as Theodore Wakim, 41, of Toronto. He is wanted on a charge of mischief over $5,000. Anyone with information on his location is asked to contact police in 55 Division at 416-808-5500.