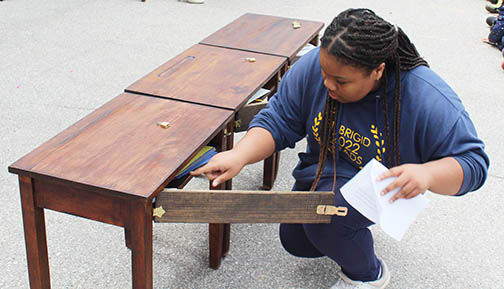 As part of its 100th anniversary celebrations, St. Brigid Catholic School in East York has put together a time capsule to preserve memories of the 2021-2022 school year for future generations.

Including a link to the school’s 100 years of history in the Wolverleigh Boulevard and Woodmount Avenue area, the items in the time capsule are being stored in three wooden desks from the school’s past.

Principal Kimberley Blanchet said the old desks were found in one of the school’s storage areas and were repurposed by adding doors and locks to the fronts so that they could act as time capsules. The desks will now be in the school’s main lobby, to be opened on the occasion of the school’s 150th anniversary in 2071.

“The items will be put in the desks and will be locked up for the next 50 years,” Blanchet told Beach Metro Community News just before the entire student body and invited guests turned out for an outdoor ceremony on May 4 to celebrate the time capsule project.

St. Brigid’s official 100th anniversary took place in November of 2021, but it was a low-key event due to continuing COVID-19 concerns in the fall.

“We decided to wait until now to do the time capsule so all the students could be involved and see what was going into it,” said Blanchet. “It was also a nice way to highlight Education Week (which was marked by the Toronto Catholic District School Board from May 1 to 6).” Each class (from Kindergarten to Grade 8), along with some staff members, the parent council, and Toronto Catholic District School Board Director Brendan Brown put items into the time capsule desks.

Not surprisingly, many of the items that St. Brigid staff and students will be looking at in 2071 when the desks are opened will make reference to the COVID-19 pandemic and the impact it has had on students over the past two school years.

Among items put into the time capsule desks were face masks with the names of students in specific classes, library books, pencil crayons, photos, and a USB stick.

For St. Brigid’s teacher Brasillia Naddeo, the school will always have a special place in her life as she also attended as a student from 1996 to 2007. Naddeo’s mother Rosanna Accettone also went to St. Brigid’s and her godmother Vincy Angelone (her mother’s cousin) taught at the school for 46 years before retiring in 2015.Angelone also attended the school.

An East York resident, Naddeo said she loves teaching in the school she attended as a child.

“We have two buildings here, the old and the new, and I know these buildings inside and out,” she said. “It’s interesting as an adult to return to the school as I remembered everything being so huge in it as a kid.

For her French Immersion class’s contribution to the time capsule, they recreated a class photo that Naddeo had been in as a student.

“We took a photo on the play structure of the students, and recreated the one with me and my classmates,” she said. Opened in November of 1921, St. Brigid’s has also played a key role in the East York community, in what was a relatively rural area when the school was first built. Over the past 100 years, the school has grown with the community and an addition to the original building was built in 1950.

With a history of 100 years, this month’s creation of a time capsule at St. Brigid’s is not the first. Blanchet said there is another time capsule that was discovered in a school cupboard that says it is to be opened in 2061. She said she is not sure exactly when that time capsule was created, but believes if was a project by a specific class.

As part of the continuing 100th anniversary celebrations, there will be a mass at the school conducted by the priest from neighbouring St. Brigid Catholic Church on the morning of Saturday, June 11, as the school followed by an open house for former students and staff from 11 a.m. to 1 p.m.