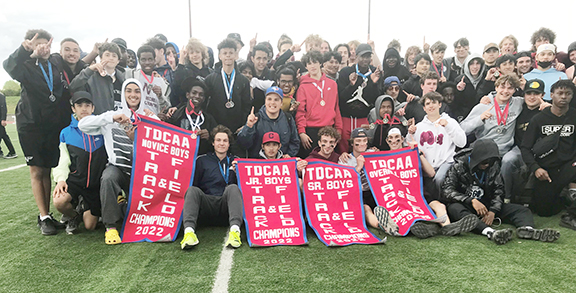 Though it took a few years, due to the COVID-19 pandemic, the Neil McNeil Catholic High School track and field team successfully defended its 2019 city championship earlier this month.

The Neil McNeil team won the overall title at the Toronto District Catholic (Colleges) Athletic Association (TDCAA) track and field meet held May 16 and 17 at Centennial Stadium in Etobicoke.

Track and field competitions did not take place at Toronto area high schools in 2020 or 2021 due to the pandemic. Back in 2019, Neil McNeil also won the TDCAA team title.

This year’s meet saw more than 1,000 track and field athletes eager to compete after their two-year absence.

And the Neil McNeil athletes of all age groups were in fine form at the meet as they swept the team titles with victories in the novice, junior and senior divisions – which, of course, met they were locks for the overall championship as well.

Traditional rivals of Neil McNeil in track and field, the team from Chaminade College was second in all of the divisions and second overall at the TDCAA meet.

The Neil McNeil team was led by the strong performances of seniors Liam McCullagh, Liam Patterson and Gaetano Pocchi. McCullagh and Patterson are planning on attending St. Francis Xavier University next year, while Pocchi will be going to Guelph University.