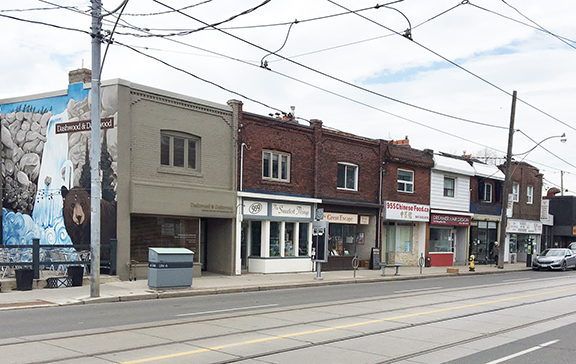 A proposal to allow a height and depth increase to 955 Kingston Rd., in a contiguous block of two-storey stores and apartments above, was granted by the City of Toronto's Committee of Adjustment recently.

A proposal to add height and depth to a storefront in Kingston Road Village has been approved by the city’s Committee of Adjustment (CoA) Toronto and East York Panel.

The request for a minor variance to permit the building of two additional storeys on the storefront site at 955 Kingston Rd., and to also extend at the four-storey height to the rear of the lot, was approved at the CoA’s April 27 online hearing.

The site of the proposal is on the south side of Kingston Road, between Scarborough Road and Silver Birch Avenue. The building is part of a connected row of two-storey buildings with mostly storefronts at street level and apartments above that was built in the 1920s.

The proposal had raised many concerns in the community over the impact it would have on neighbouring businesses, in particular The Great Escape Book Store at 957 Kingston Rd., and how it would alter the streetscape of the existing row of buildings. A large number of letters of objection were filed with the CoA prior to its meeting.

The Great Escape is a beloved institution in the area, and the location has been a book store for decades. It was known as Ed’s Books for many years before the name was changed to The Great Escape in the 1990s.

Katya Nosko, owner of the store, said she will lose light and the appeal of the area at the back will be impacted by this proposal.

“There is a huge loss of light there and the loss of my garden,” said Nosko.

She uses the large garage at the back of the lot to hold concerts, art and photo exhibitions, readings and other events including weddings.

After the CoA’s ruling, Nosko posted a statement on Facebook on April 28 thanking those who had sent letters, come in to chat with her and signed petitions highlighting the importance of The Great Escape Book Store to the community.

“The C of A approved the proposal as it is in line with the City plan for mixed use density building on these main streets. We will do our best to work with what comes next. Blessings all :),” she wrote in her Facebook post.

Much of Kingston Road is identified by the City of Toronto as an area for intensification and higher buildings, and there is a building somewhat similar to what is being proposed a couple of blocks to the east at 1035 Kingston Rd., where Collected Joy is located.

The proposal for 955 Kingston Rd. was made by property owner Allen Chin, and is within the city’s guidelines for the road.

Since minor variances were being sought for platforms on the third and fourth storeys and a change in setback from 5.5 metres from the lot line to 0.9 metres on the west lot line, the application was heard by the CoA instead of City Council.

In an earlier interview with Beach Metro Community News, Chin stressed that he and his wife Kinga are not developers, but residents of the building who are looking to expand the space for their family to live in and run their business.

He said his proposal is intended to make the neighbourhood a better place while also adding more space for people to live.

“My plan has consideration for the neighbours. I did not maximize the envelope (building space available)…I’m looking for gentle densification,” he said. “This does not impact them and I took great care with that.”

Chin, who was born and raised in the East End, said he’s been disappointed by the tone of some people’s objections and how they are questioning his motives, his right to make such a proposal or that he is trying to hurt other businesses on the block.

“The concern from the community largely centred around The Great Escape Book Store and the desire to be able to be able to maintain the special programming that also takes place at the back. The community does not want to lose the charm of this business,” said Bradford.

He understands this has been an emotional process and many people are resistant to a proposed change which will look so different compared to the other buildings there. “It’s not an easy thing for anybody. Any development or construction presents all kinds of challenges and concerns for the neighbours.”

Bradford said he took part in a two-hour phone call with Chin and Nosko prior to the CoA hearing to try and work out the major concerns and to “minimize the impact to the adjacent neighbours.”

He said they discussed construction and building impact, the building’s stability and stormwater runoff, and how to support the businesses and retain business continuity through the process.

“The applicant has agreed to some adjustments from the original plan to the neighbours and also through the building process,” said Bradford.

Concerns have been addressed “in a thoughtful and meaningful way,” he said.

Bradford said Kingston Road is an area where intensification is permitted by the city and the area is going to continue to see change, perhaps in ways that all residents may not like.

“You will continue to see an evolution along Kingston Road to include more mid-rise buildings as it’s a main street in Toronto and has access to transit lines,” he said.

As that process continues, Bradford said it will be important for residents to deal with these changes in a way that puts “empathy and understanding” at the forefront.

“We have to work together. We can disagree but we have to be civil and continue to be a welcoming and inclusive part of the city,” said Bradford.