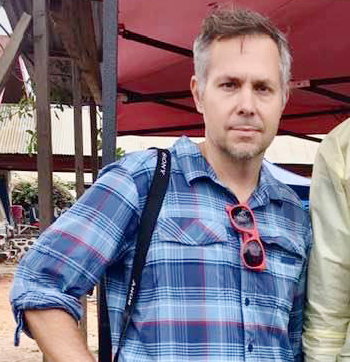 Local resident Brett Tarver is helping support the humanitarian response for the people of Ukraine. In this photo, he is seen in the Democratic Republic of Congo. Photo: Submitted.

Local resident Brett Tarver is helping support the humanitarian response for the people of Ukraine through his work with World Vision Canada.

Tarver, who grew up in the Beach and know lives in the Queen Street East and Coxwell Avenue area, is the Advocacy and Media Lead for World Vision Canada, which is a Christian relief, development and advocacy organization. He is currently in Romania and Moldova working to help Ukrainians impacted by the invasion of their country by Russia earlier this year.

“My job is focused on advocacy communications, kind of like a humanitarian journalist dedicated to raising awareness about what is going on here,” he said in an email interview with Beach Metro Community News in late April.

“Fundamentally, it’s about finding and sharing hope in what might seem hopeless. The goal is for Canadians to understand the needs of Ukrainians who have been forced from their homes and how we can help in the best way possible.”

Tarver has been with World Vision Canada for just over seven years. Prior to that, he was a journalist for 10 years working as a field producer for news stories with a television station.

He said he was working an early-morning shift at the television station when he decided a change of career was in order.

“It was dark and cold outside and it was dark in the studio. I was feeling kind of down. But then, when the light on my computer came on, the first thing I saw was a job posting for World Vision. I knew instantly it was my calling and it’s been the best job I’ve ever had,” said Tarver.

He uses his journalistic skills to tell the world, and Canadians in particular, what is happening to the people of Ukraine who have forced to flee their country as refugees.

“My past career as a journalist developed the skills to be able to share stories about some really complicated things with very little time or space and to do it in a way that people can understand while still being authentic and real,” said Tarver. “At World Vision, it’s about coming into a really chaotic situation like a refugee camp or conflict zone in the middle of a crisis and quickly identifying the best way to share what is happening.”

Prior to this assignment, he had also worked in the same role with World Vision Canada in Afghanistan, Iraq, Somalia and South Sudan.

He said what is happening to the people of Ukraine is a humanitarian crisis, both for those who have been able to get out as refugees into other bordering countries but also for those who remain under attack by the Russians.

World Vision has been working in some of those countries, including Romania, delivering food, medicine and hygiene supplies for refugees in shelters.

“The situation here continues to evolve, it’s still very fluid day by day. And so we keep adapting and responding to help where and how help is most needed,” said Tarver. “So beyond basic essentials, our priority now is mental health, education and protection.”

Tarver said many of those refugees, overwhelmingly women and children, arrive with virtually nothing but the clothes they are wearing. Even though they may have gotten out of the direct war zone, they still face numerous threats of violence and exploitation.

A family he recently met in Romainia is representative of the situation many of the more than five million refugees from Ukraine are facing, said Tarver.

“Inna and her three young children had just crossed the border into Romania after escaping Odessa. They had little more than the clothes on their backs, some essential documents and a few small suitcases. They just wanted to get to safety but she really didn’t know where she was going next and for how long. There are many stories of need like this,” he said.

Countries and organizations around the world are stepping up to the help the refugees, and Canadians are no exception.

“The overwhelming response from Canadians and the world has been so incredible, especially for refugees,” said Tarver. “It really is a mass gesture of solidarity that is unprecedented in my experience with global crises.”

Still, there is a lot of pressure is on the residents of neighbouring countries such as Romainia, Moldova, and Poland which is only going to increase.

As well as neighbouring countries, Ukrainians are fleeing to other parts of their country that are not the focus of the Russian military at the moment. This is also creating a very difficult and dangerous situation, said Tarver.

“Canadians should know the needs inside Ukraine are absolutely immense,” he said. “There are actually nearly twice as many people inside the country who have fled for their lives to escape the fighting who have found shelter in other parts of the country.

“These communities need a lot more support, especially inside Ukraine. That’s why we are mostly focused on ramping up our response in Ukraine to work with these local partners and communities to help them help others. Some towns and cities across western Ukraine have literally doubled, even tripled in size because of the influx people, mostly women and children.”

He told the story of a 12-year-old girl named Polina who had escaped from Mariupol, a coastal city in southeast Ukraine under heavy attack from the Russians, with her family. They were bombed and shelled and running out of food before they managed to get out through a humanitarian corridor that had been established.

“As food and water started to run out they tried several times to escape but were not allowed to leave. But eventually their small caravan could leave through a humanitarian corridor, but even then she said bullets struck one of the cars on the way out of the city. Luckily all of her family survived the ordeal.”

And the situation is becoming more dire as refugees continue to try and get to a place of safety.

“As this conflict goes on and if it continues to intensify as we fear, there will be other surges of many more people like Polina on the move looking for safety this would create a whole new level of humanitarian crisis,” said Tarver. “This would overwhelm the communities that host them so organizations and countries around the world need to be prepared to offer more support to ease the load on local people.”

That’s why the help coming in from countries such as Canada is so important, he said.

“The Canadian government has done so much, it really is incredible and as a Canadian it makes me so proud The real key here is sustained support recognizing that this could well get a lot worse before it gets better and even after the war ends, there will be a long rebuilding process. We simply can’t ease our support when media outlets ease off on media coverage of this crisis,” said Tarver.

“The outpouring of support from Canadians has been phenomenal. I’d just say, please, keep offering that solidarity in every way you can, including social media for those affected the most. And to continue to support organizations like World Vision that are on the ground responding. It really is making a huge difference.”

Tarver said that while he is exposed to what can be horrific situations and human suffering on a large scale, the work done by World Vision and other organizations is critically important and he is proud of his contribution to it.

“It’s been an incredible life experience working at World Vision. Through my work I’ve travelled to some of the most dangerous places to be a child including Afghanistan, Iraq, Somalia, South Sudan and Democratic Republic of Congo. The stories of people in these places break my heart over and over again, but I’m driven to make even a small difference in any way I can.”

He said that the lesson of the impact of a small difference is one he his trying to impart to his two children.

“My goal as a father of two kids, Paris and Kylo, is to try to look beyond their own challenges in life, to teach them about both the good and bad things that can happen in this world and that everyone, through even the smallest gestures can make the world just a little bit better,” said Tarver.

For more information on how you can support the work of World Vision Canada for the people of Ukraine, please go to https://www.worldvision.ca