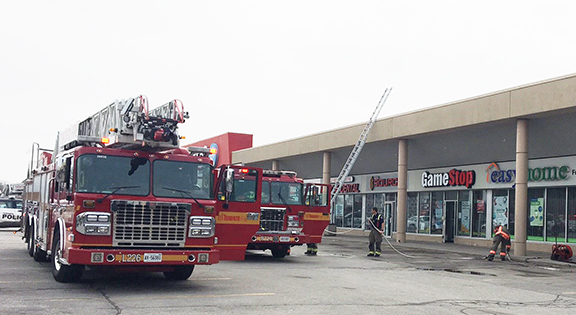 Toronto firefighters were called to Shoppers World Danforth, on the southwest corner of Victoria Park Avenue, on the morning of Tuesday, May 3. A small fire of cardboard items was discovered in the basement of a store unit and quickly extinguished. Photo by Alan Shackleton.

Toronto firefighters were able to extinguish a small fire in the basement of a store unit of Shoppers World Danforth on the morning of Tuesday, May 3.

One person was treated on the scene for smoke inhalation. No other injuries were reported.

Firefighters were called to the shopping plaza at 3003 Danforth Ave., on the southwest corner of Victoria Park Avenue, just after 9 a.m.

When they arrived they detected smoke in a unit. A search by firefighters revealed a small fire of carboard items in the basement of one of the store units which was quickly extinguished.

The unit was then vented of smoke by firefighters, who also examined the building’s roof to make sure the fire had not spread anywhere else.

The fire was a two-alarm call which brought out a large number of fire vehicles as well as police to the plaza.

Most stores in the plaza are still open and appeared to be operating normally as the incident was contained to the Game Stop and Easy Home units.