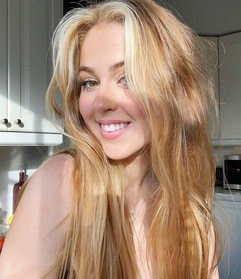 Georgia Valentyne will be releasing her debut album 11:11 on May 6.

Despite being born into Toronto fame, Georgia Valentyne faces similar struggles to other independent artists trying to promote their music.

Georgia is the daughter of Jennifer and Greg who worked on the set of the morning show Breakfast Television as an on-air host, and a cameraman respectively. Despite being raised by parents who worked in the entertainment industry, Georgia said she still faces challenges in promoting her music to the public.

She noted it has been difficult to get people to stream her work, and hopes that her debut album, 11:11, will be a success following its release date on May 6.

Growing up in Toronto, Georgia attended public elementary school but did many extracurriculars in music along the way. With the influence of her mother, Georgia took up acting, participated in musical theatre productions, sang, danced, and took lessons in piano. Jennifer added that Georgia has perfect pitch, which is a term that indicates that the artist can play music by ear, without having to read it. These attributes eventually led Georgia to attend the Randolph College for the Performing Arts in Toronto.

Jennifer said she encouraged Georgia to pursue a life in music since she was young.

“A rule in our house was that if one of the kids wanted to play music, we’d stop what we were doing, and we’d listen.”

She added that it didn’t matter if she and her husband were in the middle of a movie, they’d put everything on pause to listen to the talents of their children.

Music has been a part of Georgia’s life since she was six years old. She said the first song she wrote was for birthdays, as there was only one song that people used for the occasion. Her mother adds that when Georgia was eight or nine years old, she showed her parents her original song called Quicksand. She notes that the song was quite impressive to have been written by a kid as it had rhythm, a hook, and a great chorus. She says that her daughter has been writing ever since.

Georgia finds writing music challenging at times as the community is so small, even in a big city like Toronto.

“I’m very honest with my writing so [sometimes] I have to remember [to hold] back because I don’t want to be too blunt.” Georgia added that she writes music about her personal relationships, but often draws on the experiences of other people in her life.

She noted that she often finds it easier to come up with lyrics before chords, but her creative process incorporates both aspects simultaneously.

Georgia began her musical endeavours during the isolation periods of the COVID-19 pandemic. She worked alongside her close friend Jake Donaldson, another independent artist. The two worked on Donaldson’s song, Bluffing, and have since collaborated on more music together. Donaldson is currently helping Georgia produce her upcoming album.

Donaldson said Georgia’s music is a direct reflection of her personality, and he believes that it’s going places.

“[Her music] is completely different than any other artist’s [work] because [it] range[s] so widely from musical theatre to jazz to rock to pop to R&B,” he said.

Donaldson noted that Georgia has been in the spotlight for a few years due to her mom’s fanbase, but said her exposure to the industry “doesn’t change the way music grows.”

Georgia’s life has been filled with music since she could remember. She said song writing is therapeutic to her and “every time I’m going through something I’ll write about it.”

Although Georgia has a passion for musical theatre, she is hoping to find a successful career in being a singer/songwriter. Her high school vocal teacher Laura Norris stated that “there are certain students that you see that you just can’t imagine doing anything else, and Georgia [is] one of them. She is a person who [is] meant to pursue a music career.”