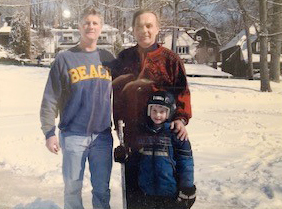 Lafleur, a five-time Stanley Cup champion with the Montreal Canadiens and a member of the Hockey Hall of Fame, died last Friday at the age of 70.

Here is Neal’s note (and photo) of the February day in 2004 that Guy Lafleur came to the Beach for a skate:

“Thought I’d send along a photo of when Guy Lafleur visited the Beach and had a skate with some local Beach kids in late February, 2004.

“This photo includes myself, Guy Lafleur and my son Braden at age 7. Mr. Lafleur was here filming a TV commercial for battery recycling.

The rink I build in Glen Stewart Park was scouted for the shoot, but warmer weather started to melt the rink a few days before. As luck would have it, the night before the shoot the temps dropped and we had an early morning snowfall. I managed to get the rink into suitable shape for the filming.

“Guy was gracious and shared some stories. A few onlookers gathered and managed to get photos and autographs. Mark Bonokowski from the Toronto Sun was here, and wrote a story for the Sun which appeared in The Sun on Wednesday Feb 25. Later that same day, the the CBC asked if they could shoot some footage of kids skating on the rink for a story they were working on about Patrick Sullivan. It was quite a day at the old rink in the park!”