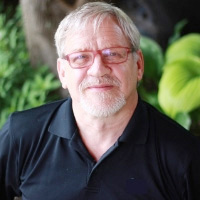 They say when your true calling calls you, you must always answer. That applies to Simon Constam who returned to writing poetry after a break of almost 40 years.

“Poetry has always been my love. I read novels, I read non-fiction as well but I have always been captured by poetry,” said Constam. “although I stopped writing for many years, I never stopped buying poetry books.”

He said the ideas to write his poems usually come from a variety of sources. It could simply be a sentence or a topic that inspires him.

His writing process is fairly lengthy and it could take anywhere between three months to a year to complete a poem. He said while writing and composing his poetry, he reads aloud, trying to sense an audience around him while doing so.

The title Brought Down comes from Jewish mystical traditions. In a religious sense, the title means to bring down from heaven. The mystical concept elucidates that ideas are somewhere in the heavens and one has to bring them down.

Constam has been working on the book for the past 12 years and he said the compilation of Jewish poems are related to his relation with God.

When talking about how Jewish poetry is different from other poetry genres, Constam said: “The one thing that characterizes Jewish poetry is what people want to call the poems. Poetry that is written by a Jewish person may or may not be considered Jewish poetry. I do not have a firm decision. My own background is Jewish and so much of my writing comes from there.” After Constam finished writing the book, he sent copies of it to a number of people including clergy at Christian churches.

He said the universal response he got was that the book was applicable and meant something to them. The book also contains a glossary in order to understand some of the Jewish terms mentioned.

“The ideas here are not Jewish ideas in any way,” said Constam. “They are general ideas but it is in a Jewish context. My book is very understanding for people who are not Jewish. That is the general response that I have got.”

He said readers of Brought Down “will find the ideas and experiences while reading the book poignant, and it will make them feel better about understanding a little bit more about the world.”

In the coming months, Constam said he plans to publish two more books based on aphorisms called The Love of Aphorisms and The Book of Dark Ideas. Aphorisms are defined as short clever sayings intended to express a general truth.

Local readers looking to purchase Brought Down can do so at Book City on Queen Street East East and at The Great Escape Bookstore on Kingston Road.

Constam also has an Instagram account called Daily Ferocity ( https://www.instagram.com/dailyferocity/?hl=en ) where he posts short aphorisms every day. He describes the account as “a collection of ideas that I would consider to be a sharp food for thought.”