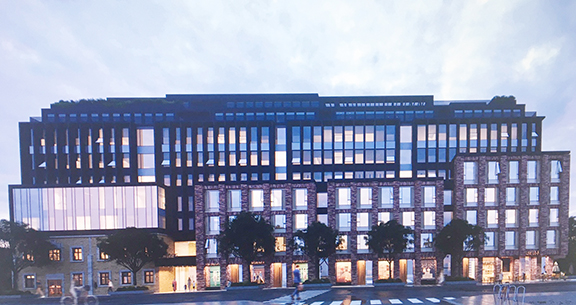 The redevelopment proposal for 1095-1111 Danforth Ave. calls for a nine-storey building with 228 residential rental units. The proposal preserves the facade of the Trull Funeral Home (bottom left of above photo) built in 1930. It also offers only 12 spots for car parking, while it has proposed 252 bike parking spots. Inset photos show the Trull Funeral Home, and St. Catherine of Siena Catholic Church, which are currently on the site.

A redevelopment plan for a Danforth Avenue site proposes to incorporate the façade of a funeral home built in 1930 while tearing down the neighbouring Catholic church to make room for a nine-storey residential building.

The proposal for 1095-1111 Danforth Ave. is on the sites of the Trull Funeral Home and St. Catherine of Siena Church, which is just east of Donlands Avenue on the south side at Byron Avenue.

The proposal was submitted to the City of Toronto in February by MHBC Planning Urban Design and Landscape Architecture on behalf of the owners named as 1095-1111 Danforth Project GP Inc.

“The owner is proposing to demolish the existing church and funeral home on the subject lands and redevelop the site with a stepped nine-storey mixed-use purpose-built rental building,” said the application’s cover letter submitted to the city.

“The proposal will maintain the existing funeral home building façade in order to preserve the heritage presence along the Danforth corridor,” said the letter.

There is limited parking spaces for cars in the proposal, with there being only 12 spots allocated. There will be ample parking for bicycles, however, with a total of 252 spaces in the proposal. The Trull Funeral Home on Danforth Avenue, which will see its façade maintained as part of this proposal, was designed by architect W. Breden Galbraith and built in 1930. Prior to that location, Trull Funeral Home had operated in the East Toronto area from 1912 – first with a location at 742 Broadview Ave. and then later at 1008 Danforth Ave.

The St. Catherine of Siena Catholic Church, which will be demolished as part of this proposal, was built in 1967. It served a parish that at that time and for years before consisted of many Italian Canadians who lived in the area.

Due to changing demographics and the fact that there were five other Catholic churches within a three-kilometre radius, the parish of St. Catherine of Siena Church was suppressed (closed) in 2009 and joined with the St. Brigid parish in East York.

From 2003 to 2018, the church was used by the Sisters of Life as a residence and place to offer services to the community. It was also used for an Out of the Cold program run by St. Brigid’s. Once the church is demolished, the Out of the Cold program will continue to be operated between St. Brigid’s Catholic Church on Wolverleigh Boulevard and St. Ann Catholic Church on First Avenue. The Danforth Avenue property where the former St. Catherine of Siena Catholic Church is located was sold by the Archdiocese of Toronto, but it is not known if the purchaser is the same group making the development redevelopment proposal.

The proposal is still in the early stages of the planning process.

For more information, please go to https://www.toronto.ca/city-government/planning-development/application-information-centre/ and then type in the 1095-1111 Danforth Ave. address.

Information is also available by contacting Planner Nader Kadri by email at Nader.Kadri@toronto.ca or by calling 416-338-5324.