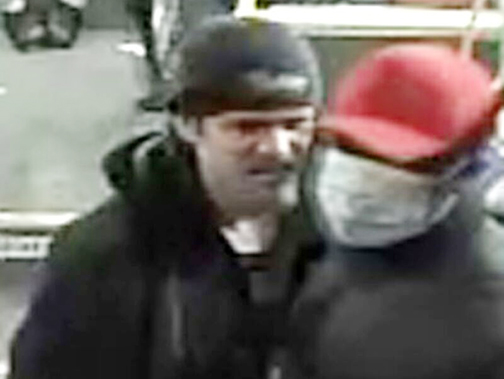 Toronto police are looking to identify the man in the black hat in connection with an investigation into an alleged assault on a TTC bus that had left Broadview Station on the night of March 26.

Toronto police are asking for the public’s assistance in identifying a man wanted in connection with an alleged assault against a TTC employee on bus in late March.

According to police, a man boarded at TTC bus at Broadview Station at approximately 9:45 p.m. on Saturday, March 26. Police said the man became involved in a verbal altercation with at TCC employee on the bus and that the man then allegedly spit at the employee.

The left the bus on foot at Broadview Avenue and Gerrard Street East.

The man is described as five-feet, eight-inches to five-feet, 10-inches tall, weighing 180 pounds, with black hair. He was last seen wearing a black hat, a black sweater, black jacket, and black pants. Police have released a security camera image from the bus of the man.

He is wanted on charges of assault and criminal harassment.

In another incident at Broadview Station, police are appealing to the victims of an alleged assault earlier this week to come forward.

Police said they were called to the station at approximately 6:15 p.m. on Wednesday, April 6, for reports of a fight.

According to police, two girls were in a fight with two other TTC patrons. Police allege one of the girls assaulted two women in the incident. When a bystander tried to step in, there were also allegedly assaulted.

Police said the two girls then fled the station.

Police are appealing to the people who were assaulted in this incident to contact them by calling 55 Division at 416-808-5500.